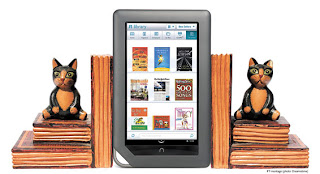 I must have missed it but apparently yesterday was a coordinated day against the use of DRM in eBooks with events being staged around the world - in cities including Cincinnati; Orlando; San Francisco; Boston; Madrid; Rome; Manchester; Nagoya, London, Japan; and Aveiro, Portugal.

The Archive has always been against DRM and would have liked to attend one of these events but I never knew anything about it, until I opened my inbox this morning and saw half a dozen emails informing me that the day had been and gone.

It looks like we are coming towards the end of the use of DRM in eBooks - many of Amazons titles no longer carry DRM and recently Tor Publishing announced they were dropping DRM across all its titles by this July.

While DRM has largely been defeated in downloaded music, it is a growing problem in the area of ebooks, where people have had their books restricted so they can't freely loan, re-sell, or donate them, read them without being tracked, or move them to a new device without re-purchasing all of them,” the advocacy group wrote in its announcement of the event. “They've even had their ebooks deleted by companies without their permission.”

Remember a few year ago when Amazon had been offering George Orwell's 1984 thinking it was public domain title, and then discovered it wasn't and so they automatically deleted it from Kindles across the globe. Now obviously Amazon had to stop offering the title in their stores, but rather than storm in and forcefully remove it from user's Kindles what they should have done was pay the copyright owners for the books dowloaded and then simply stop offering the book. It was that action that stopped me buying a Kindle for a good long while and instead adopted a Sony eReader. Mind you I'm a Kindle convert now and wouldn't give the Sony a second glance. But I do from time to time worry about the amount of control Amazon have over the global eBook trade - I would hate to see a day when Amazon are the only player on the market.

I'd like to see the day when you could buy a eBook anywhere for any device and freely swap it between devices, so something bought from Barnes and Noble would run on Amazon's Kindle and vice versa. Well, with the death of DRM we are heading towards that day,