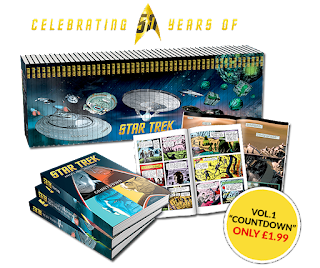 Star Trek fans will be interested in the new part work from Eaglemoss Publications - each issue is a hardcover graphic novel reprinting stories from 50 years of Star Trek comics. The first issue - Countdown,  features the prequel story to  J. J. Abrams' 2009 Star Trek reboot as well as the first ever Star Trek comic strip with 1967's Planet of No Return which was originally published by the iconic, Gold Key Comics.

Each hardcover is well put together - they really are handsome editions - you can pick up a bargain with the first issue, currently available, at the low price of £1.99 - the regular price will be £9.99 which is pretty good value given the quality of these hardback editions. 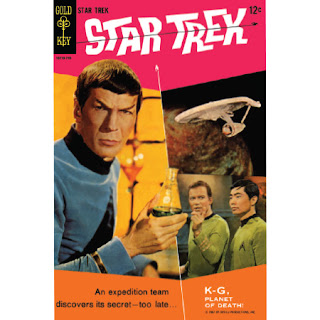 When the series is complete it will have collected strips from Gold Key Comics, DC, TV21, Malibu Comics, Paramount Comics, Wildstorm Comics, Tokyopop and IDW and will have featured sequels to original stories, movie adaptations, and  lost tales (scripts that were never filmed). Many superstars of comic writing will have credits as well as familair names from the writing staff of all iterations of the TV series.