Unfinished discworld as flat as a pancake

It's kind of sad but oh so Terry Pratchett - when the author passed away he left instructions that his computer drives containing his unfinished works be placed in the middle of the road and driven over by a steamroller. The author, it seems, was no fan of other writers continuing the work of dead writers and he didn't want anyone meddling with his work after his own death. 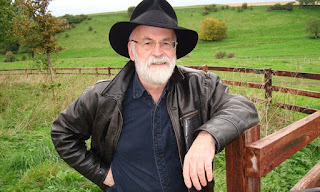 “Pratchett left instructions that whatever he was working on at the time of his death to be taken out along with his computers, to be put in the middle of a road and for a steamroller to steamroll over them all”. Close friend and author, Neil Gaimen

And this is just what happened a couple of months ago when the hard drives where driven over by a vintage steam roller.

The symbolism of the moment, which captured something of Pratchett’s unique sense of humour, was not lost on fans, who responded on Twitter with a wry melancholy, though some people expressed surprise that the author – who had previously discussed churning through computer hardware at a rapid rate – would have stored his unfinished work on an apparently older model of hard drive.
The hard drive will go on display as part of a major exhibition about the author’s life and work, Terry 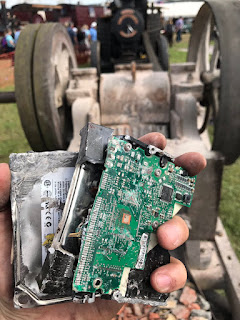 Pratchett: HisWorld, which opens at the Salisbury museum in September.
at September 05, 2017 No comments: