Larry McMurtry - The Passing of a true legend

Larry McMurtry will always have a special place in the hearts of western fans for his Lonesome Dove sequence which started in 1985 with Lonesome Dove (the source material for the excellent TV mini-series), which was followed by a sequel The Streets of Laredo (1993) and then two prequel novels Dead Man's Walk (1995) and Comanche Moon (1997). The characters of Gus and Call are now as iconic to western literature as any of the other characters who have ridden across the page and blazed over the silver screen. 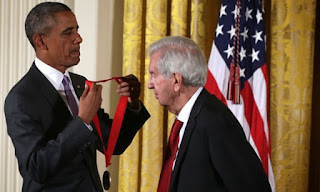 Mr McMurtry died on March 25th this year at the age of 84 and left behind an envious body of work. And whilst Lonesome Dove may be his most famous work, largely thanks to the multiple Emmy winning TV version of the sequence he is responsible for many many highly regarded and wall known works - The Paul Newman movie, Hud came from one of his books, as did The Last Picture Show and he was responsible partly for the script of the movie, Brokeback Mountain. During his lifetime he scored many awards including a Pulitzer and a National Humanities Medal.

In tribute I here post my review of Streets of Laredo, chronologically the final book in the Lonesome Dove saga:

'More worrisome to him was the fact that the joints of his fingers had started to swell, when it got cold. For most of his life he had paid no attention to weather; weather was just there. He never let it interfere with his work or his movements. In time, the weather would always change, but the work wouldn't wait. Now it seemed, weather was interfering plenty. When the cold struck his wrist joints became swollen, and the joints of his fingers even more so.'The Streets of Lardeo is the sequel to the Pulitzer Prize winning, Lonesome Dove and where it was the second book published in the series it is actually the fourth book chronologically. The author would follow this novel with   a couple  of prequel novels (Dead Man's Walk and Commanche Moon) that looked at the early days of Captain Call and Augustus McCrae. This book though is a direct sequal to that first novel and not to be confused with that TV movie, Return to Lonesome Dove which is a poor substitute to this, the real conclusion to a beautifully written, painfully realistic western tetralogy . In The Streets of Laredo, McMurtry adds the final strokes to the story of Captain Call, and gives the character a worthy if somewhat depressing send off.The book is all about growing old - as the Wild West that needed men like Captain Call slowly fades into history then so too do men like Call. McMurtry's westerns have never been about gun blazing heroics, although there are plenty, but more about presenting in as vivid and truthful a fashion as possible the real cruelty of the period. The book opens many years after the events told in Lonesome Dove and when we meet up with Captain Call he is an aged character, someone better suited to spending his days in a rocker whittling away at pieces of wood, but Call doesn't pay much attention to his growing old and has long as he can still do what he sets his mind to he doesn't really think about the changes age brings to his once strong body.'When she looked out the door of the rooming house and saw Captain Call coming, she had been shocked at how decrepit he looked. Pea Eye had mentioned, casually, that the Captain wasn't as spry as he had been, but the comment hadn't prepared her how the man actually looked.'Call find himself hired by the railroad to track down the youthful bandit, Joey Garza who is making  a name for himself by striking trains across the Mexican border. Call is teamed up with Brookshire,  a man of the East who is really not suited to the harsh conditions in the West - he spends much of his time either chasing his hat which blows off in the Texas winds or pining for his bossy wife, Kate. Soon they are joined by  yound deputy, Plunkert who is no more suitable that Brookshire and also spends much of his time thinking of the young wife he felt behind in Laredo. Both of these men will lose their wives during the long journey ahead of them. 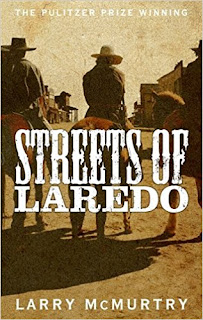 As well as Joey Garza, Call has to contend with Mox Mox, the manburner, a truly sadistic character who takes great pleasure from burning people alive - man, woman or child it matters not to the runty bandit and some of the scenes concerning the character, although largely told in flashback, are truly stomach churning. It's not all grim though - there are many great character moments. The Indian tracker, Famous Shoes offers some great comedic relief and there is a scene where a group of whores are talking about the first men in their lives that displays the author's incredible skill with character and dialogue.In the end Captain Call is a legend and the author skilfully weaves his story around several real historical characters, Charles Goodnight, Hanging Huge Roy Bean and John Wesley Harding for instance play major roles in this wonderfully written epic of the old West.'Call was no longer the man who had lived in the old times; he was no longer even the man who had killed Mox Mox. That man was not the cripple who lived in a granery, in a barn on the Quitaque. That man lived back somewhere in memory, across a canyone, across the Pecos; that man had been blown away, as Brookshire feared he would be, on the plains of time.'To sum up - a wonderful book that must be read. Absoluely astounding - lyrical, elegiac and jaw dropping!Like the other books in the series, Streets of Laredo was made into a TV mini-series, this time with James Garner in the role of Captain Call.