Stealing from the Detectives 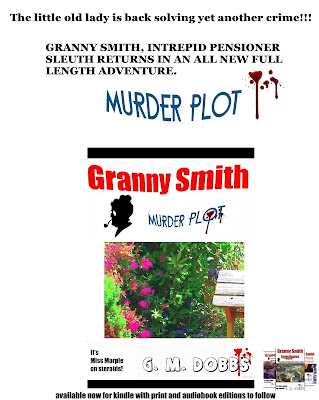 My own series character, Granny Smith is an amalgamation of varied pop culture detetectives - when I was creating the character the biggest influence was, of course, Miss Marple. I like the idea of a fish out of water, and that's just what Granny is - a busybody pensioner who becomes embroiled in one crime after another, usually besting the police and bringing the guilty to justice. In creating the character I wanted to build her character by taking traits of other detective characters... some of these traits were so ingrained in detective fiction that they had become stereotypes. However stereotypes are not always to be avoided, and can be used almost as a kind of shorthand in character building.

Granny smokes a pipe - that comes from Sherlock Holmes and indeed the silhouettes used on the book covers are very much based on Holmes. I instructed artist, Tony Masero, -  to think Holmes as an old lady, when creating the illustration. It can of course be argued that every fictional detective holds genomes of Holmes in their DNA. For Holmes may not have been the first fictional detective, but in terms of creating the modern genre he was indeed standing on Ground Zero.

Granny's love of music - this primarily came from Colin Dexter's Inspector Morse. The author used Morse's love of music to flesh out his character, and often to power the plots -  but where Morse enjoys classical music and opera, Granny is more into heavy metal and rock operas. It seemed to be that most fictional detectives had a leaning towards one form of music or another - Ian Rankin's Rebus was into his rock music, Michael Connelly's Harry Bosch loves his Jazz, Mark Billingham's Tom Thorne likes country and western and Inspector Frost - well, I like to think he woud have enjoyed his music if only he could find a CD player amongst the chaos of his office. Music, of course, holds a long tradition in detective fiction - think Sherlock Holmes and his violin. Then again we have Lord Peter Wimsey who was written as an amatuer musician of note (pun intended).

Thorne had tried, once, to tell him. To explain that real country music was fuck all to do with lost dogs and rhinestones. It had been a long night of pool and Guinness, and Phil Hendricks - with whichever boyfriend happened to be around at the time - heckling mercilessly. Thorne had tried to convey to Holland the beauty of George Jones’s voice, the wickedness in Merle Haggard’s and the awesome rumble of Cash, the dark, daddy of them all. A few pints in, he was telling anybody who would listen that Hank Williams was a tortured genius who was undoubtedly the Kurt Cobain of his day and he may even have begun to sing “Your Cheating Heart” around closing time. From Lazybones by Mark Billingham (2003)


Granny is something of an anti-establishment figure. This of course comes from the long tradition of  maverick detectives  - there have been so many - detectives with their own code of right and wrong, detectives who don't mind breaking the rules if the end justifies their actions.

Granny's fashion sense is, to say the least, unconventional - something I borrowed from the wonderful character of Michael Belker from Hill Street Blues. This guy looked truly unique and this was something I felt was important for Granny's character.


Granny Smith was thought by most to be an odd sort, altogether harmless but decidedly odd. She dressed, an unkind person would say, like a dosser. While more kindly souls would have to admit that her style of dress was, to say the very least, eccentric. She usually wore tight leggings that were better suited to a woman half her age and would wear these with a variety of T-shirts and a body warmer of navy blue fleece.  She always wore that body warmer, zipped up in winter and open during the warmer months. And if all this didn’t make her look bizarre enough she topped it off with the corncob pipe that seemed to be permanently clamped between her teeth. From Granny Smith Investigates by G M Dobbs (2012)


Yep...Granny Smith's character came from a lifetime of enjoying the wonderful creations of others, and wanting to take my own spin on the Agatha Christie type of amatuer crimebuster.  The fourth Granny Smith novel, Murder Plot is published today. Granny is a character who has been called both Miss Marple on Steroids and Batman with dentures. The pop culture references are suitable since in creating Granny I thought long and hard about those who had gone before - we are all standing on the shoulders of giants, you know.

Gene Hunt - The hardrinking cop from Life on Mars actually owed much to Jack Regan from the 1970's classic, The Sweeney. And on the surface you'd think that Gene Hunt was a million miles
away from Granny, but the character had a straightforward way of speaking - delivering banter which was often crude but mostly hilarious. This non PC attitude is something that was very important to the creation of Granny Smith. Granny doesn't take no shit and she abhors political correctness, seeing it as a form of censorship. 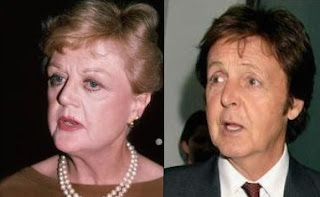 a little to Miss Marple herself. The character lived in Cabot Cove, Maine, which seemed like an idyllic seaside resort but had an alarming murder rate: Lansbury encountered a total of 274 killings, despite the town having a population of just 3,500.  Granny's own village of , Gilfach has a smiliar population and whilst the murder rate may not be so high it is certainly climbing. 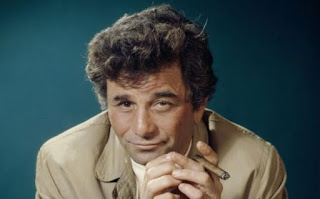 Another character I kept very much in mind when writing the first Granny Smith was Columbo as played by the wonderful, Peter Falk - the detectives bumbling manner concealed a razor sharp mind. In the murder investigations he becomes involved in Columbo often seems to be the underdog pitted against a much smoother foe. I still love Columbo and can (indeed I often do) watch the old episodes over and over again, so it is no wonder that a little of the detective seeped into the creation Granny Smith. Where Columbo has his shabby raincoat, Granny has her tatty body warmer.

Have I mentioned location - well yeah I have briefly, but the location in which the Granny Smith books would be set needed to be fleshed out to a point where the village of Gilfach became a character in itself. This is something that other authors are particularly good at - Ian Rankins Rebus books thrive on the well realised depection of Edinburgh, and Morse would be nowehere without the donnish Oxford he inhabits. Wilkie Collins Moonstone (1868) displayed the importance of location in crime fiction by setting the expertly plotted story in a remote country house. And so I was aware that the location, the setting of the Granny Smith books was of vital importance. I decided on a fictional version of my own village, Gilfach Goch which is situated in the South Wales Valleys. And so the village of Gilfach in the Granny books may not an exact watercolour of the real Gilfach Goch but it is certainly an abstract representation.


The Granny Smith series are available in all major eBook formats, as well as audiobook...do a Google search on Granny Smith by G M Dobbs and you'll find your way to Granny's madcap world of murder and mayhem. I do hope you stay for awhile.

Granny Smith is Back 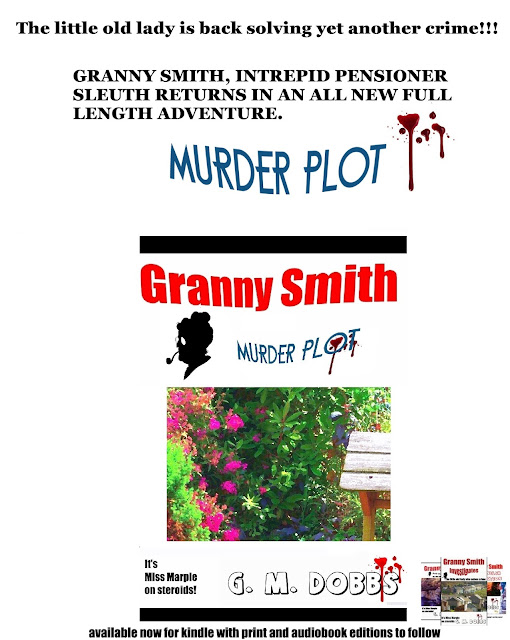 Once again the small Welsh village of Gilfach find itself the scene for a particularly brutal murder when the body of Joan Barkingsdale is found concealed in the allotments of a local radio celebrity. The police think it is an open and shut case, but Granny Smith is convinced they have the wrong man, and that there is a much more complicated murder plot to uncover.
Posted by Gary Dobbs/Jack Martin at 01:26 0 comments 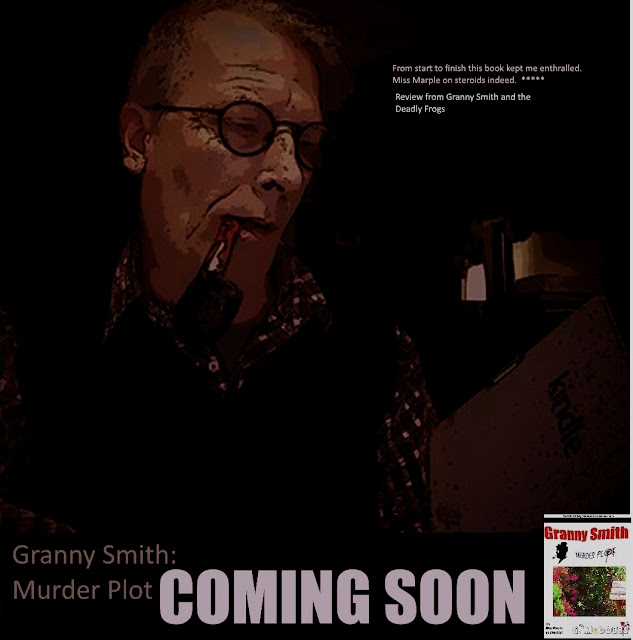 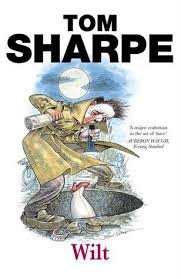 I first read this book many many years ago when I was in my mid-teens, and I remember loving it. I decided to revisit it as an adult but was slightly dubious. Would it be as good as I remembered?

To be honest it was even better - most of the humour is broad enough for even a teenage reader to enjoy but there's a sophistication here that must have gone over my head years ago. I think with this re-reading I got more out the book. It had me laughing like a loon several times and my heart was totally taken by Henry Wilt, the downtrodden everyman who manages to stand up to and best the establishment after a comical series of events culminate in him being arrested for a murder he didn't commit. 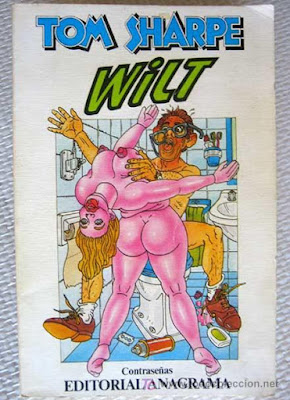 Several scenes are genuinely side-splitting - the section where the inflatable doll (with a vagina!) is pulled from the concrete filled tomb had me roaring and I had to look around several times in embarresment. I was reading the book while parked up in Tesco's carpark and people passing must have thought that I had lost my mind as I sat there  screaming with uncontrollable laughter. The highlight of the book for me, were the interrogation scenes between Henry Wilt and the non nonsense policeman, Inspector Flint. These scenes are a masterclass in comedic writing and are among the best written comedy I have ever read. Inspector Flint starts out in control but gradually Wilt turns the tables, and it is the policeman who ends up being worn down as the tables are turned on his interrigation. In face Wilt takes strength from the constant police attacks and even drives a psychiatrst ,called in to examine him, to the brink of madness. The Wilt character may belong to the middle classes of the times but he comes across as a true working class hero in his dealings with the pomposity of the establishment.

How could I pick fault with this book when it is just so entertaining? Of course modern readers may find it a little misogynistic and while some of the attitudes expressed in these pages may belong firmly to the era in which the book was written, to condemn it for these reasons would be a mistake. Eve Wilt is painted as a truly formidable character. So much so that the reader can empathise with her husband's murderous intentions towards her, and at no point does she feel like an helpless victim. Quite the contrary it is her husband, Henry who comes across as the victim. He is just a passive personality who bumbles his way through the book, while events befall him that will result in him regaining - no not regaining but  discovering his manhood for the first time, and coming out very much on top.

At the end of the book both Henry and Eve Wilt have undergone a transformation and this reader was left with split sides and an urge for more Henry Wilt.