Bomber Braddock is Back! 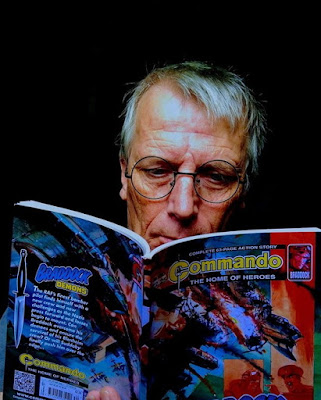 The character of Matt Braddock first appeared in The Rover Comic back in 1952 - I wasn't even born then and I first came across the character in the 1970's when he appeared in The Victor. The character was popular enough that he even appeared in Warlord and several of his stories have been published in graphic novel format under the title, I flew with Braddock.


Braddock was known for his fearless nature, superb piloting skills and no-nonsense attitude. He had no time for petty rules and regulations, and remained at the rank of sergeant, refusing to be promoted to an officer rank. However this didn't stop him from standing up to incompetent superiors, or defending other enlisted men from overzealous courts-martial. He spent almost as much time clashing with superior officers as the Germans, and on two occasions in I Flew With Braddock he came fairly close to being court-martialled for assaulting a superior officer (although one incident was a misunderstanding and the other was under severe provocation). The narrator of these stories was his hero-worshipping navigator, George Bourne (a Dr. Watson-type narrator, a relatively sophisticated device for juvenile fiction).
Braddock was so highly regarded that he had carte blanche to pick his own flight crew, and was frequently called upon to advise high-ranking commanders of the RAF. Braddock flew several types of aircraft, but his most prominent command was the Lancaster Bomber "F Fox". At the start of I Flew With Braddock the crew was Braddock and Bourne, co-pilot and flight engineer 'Ham' Hancox, bomb aimer Tom Tanner, radio operator 'Nicker' Brown, mid-upper gunner 'Hoppy' Robinson, and tail gunner Les Howe. Les Howe clashed with Braddock early on and was replaced by 'Baa' Lamb, and later 'Hoppy' Robinson was badly injured in a raid and replaced by Arthur Atkins.

The  character makes a welcome return in the pages of Commando Books - this week, in Commando issue 5267 Braddock stars in a story entitled, Demons. This follows on from issue 5259 which featured a story simply entitled Braddock.


Issue 5267 Braddock: Demons is on sale now in both physical and electronic format
at October 06, 2019 No comments:

Lord Peter Flint is back after nearly thirty years!!! Commando Comics brings back a classic character

To men of a certain age, those who grew up reading British adventure comics, the name of Lord Peter Flint will be a familiar one. The character, a kind of war-time James Bond, first appeared in the premier issue of Warlord comic way back in 1974 - I was eight years old at the time. The strip quickly became the flagship story with the comic even launching a Warlord club in which you, the reader, could join and become a Warlord agent - in the issue dated July 4th 1981 it cost a 30p postal order to join the top secret Warlord club and for this you would get a code book, a membership card and a rather spiffing badge. 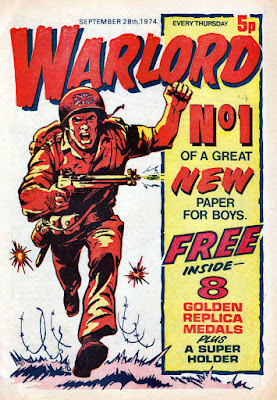 Warlord Comic ran some great stories over the years - it was published weekly between 1974 and 1996 - and many characters became favourites - Union Jack Jackson, Killer Kane,  Major Heinz Falken and many others but Lord Peter Flint, Codenamed Warlord remained the centerpiece of the comic.

It was therefore great news to learn that Commando Comics, the UK's longest running comic series which has been publishing non-stop since 1961, recently brought the character back to action in the pages of its digest sized Commando books.


The return of Peter Flint, entitled Codename Warlord was published this August and was written by Iain McLaughlin, a scribe who in his younger days had been a fan of the character.


"The first issue of Warlord came out on a week when I was off school with a stinker of a cold. My dad bought me this new comic to cheer me up a bit - and also so he could read it himself. I read that issue of Warlord and I was hooked. After that, I read every issue for the next six or seven years. A huge part of what kept me reading was Codename Warlord with Lord Peter Flint. He was part James Bond, part Scarlet Pimpernel and completely brilliant. The scripts and the art came together to tell wonderful, gripping stories that stick in the memory even to this day. When I was asked to come up with ideas to bring Lord Peter Flint to the pages of Commando I leaped at the chance. Flint is a fantastic character with so much potential for the kind of fantastic adventure stories Commando is famous for. I hope the readers have as much fun reading Flint's return as I had writing it,"  Iain McLaughlin 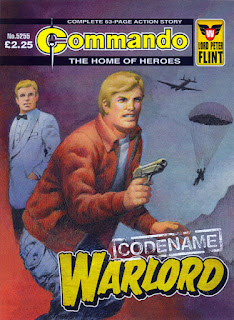 The re-birth was successful enough that a second book featuring the character, Codename Warlord: Ship of Fools was published only last month.

The welcome return of the character has been met with a strong response and Commando have revealed that other classic characters from its extensive archives will soon see print in the pages of Commando Comic - me, I'm eager to see the return of Union Jack Jackson and his Irish-American sidekick. 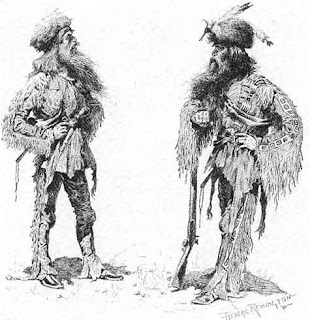 Kentucky governor, Matt Bevin has suggested that his state really needs to capitalize on the connection to the Harpe brothers, America's first serial killers after reading a report on how much revenue Jack the Ripper tours bring into London on an annual basis.

The brothers killed at least 39 people and they had a signature move - they would remove a victim's stomach, open up the chest cavity and bizarrely fill it with rocks.