The Flock are massing 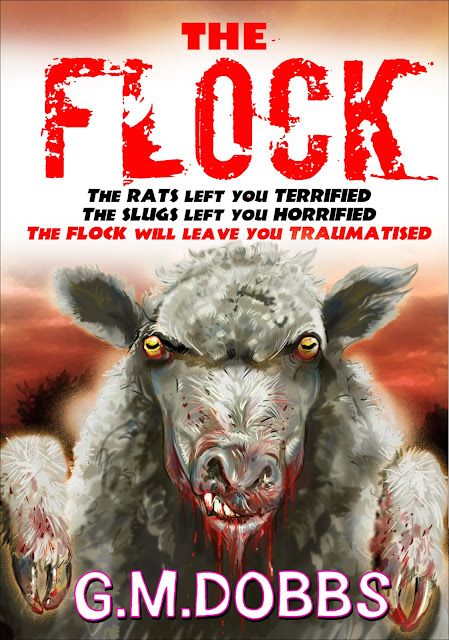 Back to Black - Coloured Vinyl: Any good or a useless fad? 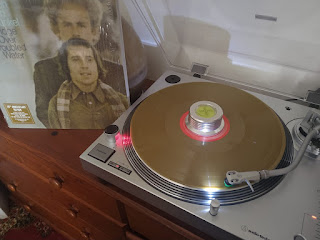 Regular readers of this blog will know that collecting vinyl records has become a passion of mine over recent years - Music has always played a big part in my life, but I, like many others of my age found myself switching from vinyl to CD sometime in the mid 1980's, and for many many years I didn't even own a record player. It was, most thought, a dead medium.

However, here we are in 2020 and incredibly vinyl has not only made a comeback, but is the bestselling physical medium for music sales. Whilst CD's are slowly fading away, vinyl records are booming and the equipment required to play these records has never been more affordable or technically better. These days you can set up a pretty decent system for less than £500 - I know I did and the sound I get it superb.

Another trend in new vinyl is with the vinyl itself - most new vinyl is now thicker and heavier than the old records we were used to, as a result it sounds better and is far more durable. New vinyl is usually 180g in weight and the pressing techniques used in record plants ensure the best possible sonic reproducion.

But how do they actually sound?

Pretty good to be honest. 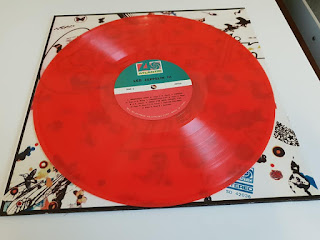 The raw material used to produce a record - polyvinyl chloride arrives at the pressing plant in granule form. Usually these granules are black in colour. These granules are then melted down and made into a soft dough like substance. These dough balls are then placed into the mould of an hydraulic press and the record is pressed. To make a transparent record the process is the same but the granules used are not the typical black ones but transparent. The melting and pressing remains the same. However because much more of the black granules are ordered by record companies then the quality control requirements for the black granules are usually much higher than for the transparent. This is why transparent records have historically suffered from static much more often than the standard black records.

Now coloured vinyl is slightly different and requires an additional step in which pigment powders are added to the transparent granules. Now this means that the pigment particles within the record can often be traced by a stylus and produce background noise when playing the record. Splatter record of even multi- coloured records take this a step further and multiple pigmentation powders are added to the granules. This can unfortunately increase background noise in the record even further. 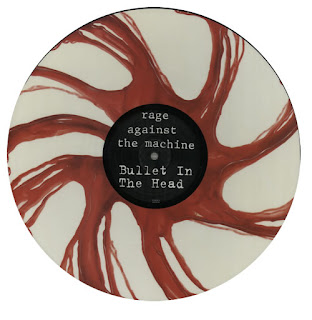 But how bad is this background noise?

Well, the plating process (putting the music onto the disc) for coloured records is exactly the same as for black records, so it is the mastering stage that is the most important step, and no matter what colour the record is good mastering is good mastering. So whilst, coloured vinyl may not be as good as black vinyl most of these imperfections could only be noticed by highly sensitive meters and not the human ear. On the other hand bad mastering can not be hidden no matter what colour the vinyl.

And so in the final analysis the sound quality between a good traditional black record and a good, well mastered coloured record will likely remain inaudible to most listeners.

So add a little colour to your life.

Essentially Vinyl - The Boomtown Rats: A Tonic for the Troops 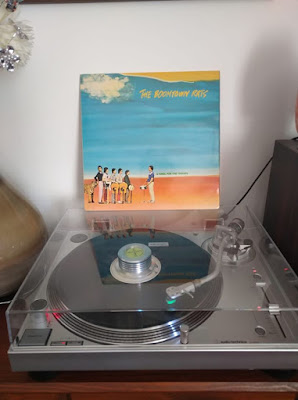 If there's one thing above all else that pulled me into the vinyl resurgence, and believe me I am now a total vinyl nut, then it is the chance to rediscover my youth. Searching second hand and charity shops for old vinyl is a pleasure indeed.

This album, Tonic for the Troops, is a a perfect example of this. I owned this album when I was a kid and finding a copy last week was amazing - I felt my heart skip a beat as the years fell away and I was a snobby nosed teenager again.

The closing track on this album, Rat Trap was a No1 single back in 1978 - this was the summer of the movie Grease and the track replaced the song, Summer Nights in the top spot. I still remember seeing the band on Top of the Pops when lead singer, Geldof ripped up a picture of John Travolta and Olivia Newton John. This was a subversive act at the time -  Years later, Sinead O'Conner said it was this memory that provoked her to famously rip up the picture of the Pope.

The Boomtown Rats were one of a handful of bands during the fag end of the 70's who changed music. Back then the cool kids all had a collective mantra and that was that whatever was happening in pop music was crap. Too bad then that Rat Trap was replaced two weeks later at the top spot by Rod Stewert's, Do You Think I'm Sexy. Only The Beatles, it seemed, were truly bigger than Rod.


Still Tonic for the Troops remains a great album - sounding like Springsteen filtered through a punk/new wave prism. And Rat Trap is still an awesome track, but then there's not really any filler on this album. Another stand out track is I never Loved Eva Braun, in which Geldof imagines himself as Adolf Hitler  -

- It's a strange song but the sense of humor pulls it through. It's bloody funny is what it is. Just imagine old Adolf crooning as Berlin burns. Poor Eva.

Side 1 - Like Clockwork, Blind Date, I never Loved Eva Braun, Living in an Island, Don't Believe what you read.

Side 2 - She's so Modern, Me and Howard Hughes, Can't Stop, Watch out for Normal People, Rat Trap

At a loss for something to write about, I slipped an album (Yep. vinyl stickler me) onto the turntable. I hadn't listened to Iron Maiden's Powerslave for some time,a 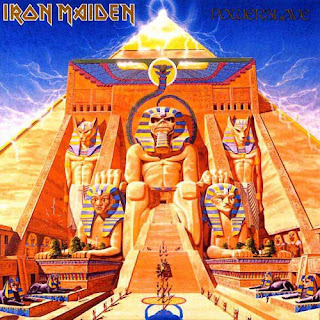 nd this seemed a good choice.

Heavy Metal isn't usually my type of music but I love several albums from Iron Maiden. Though to be honest I do listen to the genre from time to time, though some of it can be overblown and quite frankly ridiculous. Mind you, Maiden often do ridiculous but they do it with real style and they are one of those bands that transcend genre and almost become a genre of their own.I discovered this album many years ago at a friends house - he was a full time metal head, or headbager as we used to call them. The track Rime of the Ancient Mariner was playing - the middle section of that song really struck me at the time. All of a sudden the guitars die, the driving rock riff seems to have been strangled and all we are left with is the eerie sound of a ship adrift on the ocean. Over that, with only the creaking timbers for percussion, comes Bruce Dickenson (least I assume it's Bruce) quoting the most famous lines from Colerdge's poem -Day after day, night after night ,we stuck nor breath nor motion. As idle as a painted ship upon a painted ocean. Water, water everywhere and all the boards did shrink.Water, water everywhere and not any drop to drink. 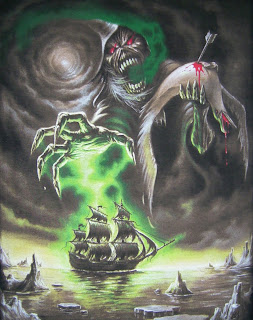 It's a gloriously effective moment - spooky in its intensity and the quiet section (as I call it) lasts for maybe four minutes before the driving rock guitars come in to finish off the song. It's a true work of art and transcends genre. It's more than a rock song - it is a genuine artistic triumph - moody, atmospheric and rocking. Maiden have done some incredible epic songs along these lines - When the Wind Blows, Empire of the Clouds are just two others that spring to mind, but Rhyme was for me the first time the band really pulled off epic like this.

It's a true work of genius, a masterwork, a novel in the rock format. And it sounds as good today as it always did, because there is no sell by date with true art.The rest of the album is equally good (there's not a bad track on here) and each track is almost a novel in its depth, since Maiden's style of songwriting is very much narrative driven, like a story set to music. From the rollicking rock of Aces High and 2 Minutes to Midnight, to the Egyptian saga of the title track the album doesn't put a foot wrong. In fact the track Powerslave is probably my second favourite cut on the platter. I like a few other Maiden albums but this one, to me, stands out and will always be an essential record for me.
at July 19, 2020 No comments: 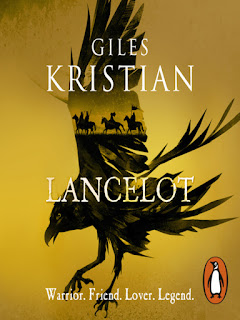 Giles Kristian is a new name to me - I knew little about the author when I picked up Lancelot and a quick Google quest told me that he had written several well received action/adventure novels that centered on the Vikings, as well as a brace of books set around the English civil war. He also co-wrote a book with Wilbur Smith.

I purchased Lancelot because I've always been something of a sucker for all things Arthurian, and I have, over the years, read many books that used the legends as a starting point but what I found in this book was a totally original retelling of the famed sagas, that uses the love triangle between Arthur, Lancelot and Guinevere in a totally audacious way that allows the author to present several remarkable twists and turns that literally, I kid you not, had me open mouthed. I soaked deep, allowing the fiction to submerge me,  into the world of a story well told.

There is something of a lyrical poetry to the author's style, but at the same time the story is straight forward and propels the reader along in the way all the best fiction does. It's a big book, topping six hundred pages, but not once during the narrative did the engine stall. I'd recommend this book highly to anyone who fancies escaping into a well realised world and spending time with wonderfully drawn characters.

The story is told in the first person with Lancelot himself the narrator, and through this device the post Roman landscape is brought vividly to life. We follow the young man through his childhood, and into adulthood where he meets and is bound to King Arthur, the high king of the Britons. It is a story of war, of betrayal, of jealously but mostly it is the story of love.

Bloody marvelous, it is.