Doctor Who: Gender Swapping Adventures in Time and Space 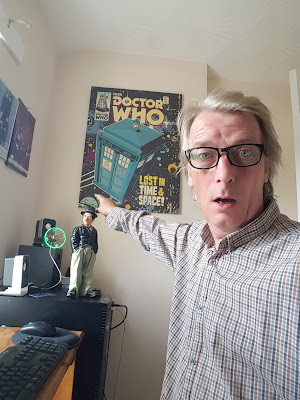 The hot news this week is nothing to do with Brexit. Nor does it concern Theresa May's futile cling to power. Even the criticism over Ed Sheeran's cameo in Game of Thrones pales into insignificance when placed beside such momentous events. Nope it's none of that - even Donald Trump has been relegated to the back pages by the one story that is burning up both the virtual and physical media - the big news, the world changing revelation, the pivotal  piece of information is .... wait for it....

HERE WE GO - Doctor Who has regenerated and he's become a she. Yep,  without a scalpel or hormone in sight the Gallifreyan penis has vanished and left behind a crack in time.

The BBC made the official announcement last weekend during the Wimbledon final - this Christmas current Doctor Peter Cabaldi will regenerate and become Broadchurch star, Jodie Whittaker.

'The show is now dead to me.' Complained another.

'The show's pink agenda is now complete,' Tweeted yet another.

Though does it really matter if the character of Doctor Who is male or female? Time Lords can of course regenerate when their current body is injured or grows too old for galactic adventuring. And since the show began way back in the black and white world of the 1960's, the character has changed time and time again...though each time the masculine gene has dominated. So does it really matter if a character who has throughout its fifty years plus history been a man suddently changes gender? Will the dynamic of the show change? I suppose the dynamic is bound to alter but will this be to the detriment of the show? There is always the possibility that this major change could actually freshen things up? In principle I've no objection to the Doctor being a woman, but I do worry that this will alter the show in such a way that it will no longer be the Doctor Who we know and love.

At the moment the show is not at its strongest point in any case, and it has already lost many of its classic era fans, as well as many who only found the show when RTD brought it back to the screen.  Personally I'm not against the idea of a female playing the lead, but I am dubious...it seems like too much of a gimmick, it seems desperate and I think it is too drastic a change and will fall flat on its feminine face. The casting of a female doctor was inevitable in the long run, but maybe now is not the time and the odds are that the show will turn into a kind of Buffy in space. Though honestly that's just my opinion and it's not sexist, nor is it misogynistic

The thing about the Doctor is that he's kind of Sherlock Holmes in space, he's  a cold fish and would a woman work as such an emotionless character? I guess only time will tell, and whilst I am no longer a part of the show's core audience I have grown up with the show, and for me Jon Pertwee will always be the Doctor, but I would like the show to continue and captivate children in the same way it once captivated my generation. And you know what, maybe a doctor with boobs could work.