Justified - a gold standard show that really deserves to be better known. 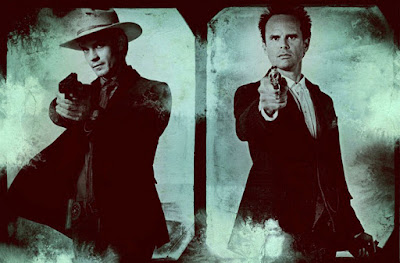 Recently I managed to catch up on the final two series of Justified, the series based on the writings of Elmore Leonard, and I'm really sorry that the show had to end but it didn't really put a foot wrong throughout the six seasons - it may have stumbled a little with a rather bland fourth season but it was still far superior to a lot of other shows that filled the airwaves.

'Dear Lord, before we eat this meal we ask forgiveness for our sins, especially Boyd- who blew up a black church with a rocket launcher, and afterwards he shot his associate Jared Hale in the back of the head out on Tate's Creek bridge. Let the image of Jared's brain matter on that windshield not dampen our appetites, but may the knowledge of Boyd's past sins help guide these men. May this food provide them with all the nourishment they need. But, if it does not, may they find comfort in knowing that the United States Marshal Service is offering fifty-thousand dollars to any individual providing information that will put Boyd back in prison. Cash or check, we can make it out to them. Or to Jesus. Whoever they want. In your name, we pray. Amen.'

No doubt, the show will gain true cult status with the passage of time and with the preponderance of streaming services it'll be there for anyone who wants to check it out - in the UK it's available on Amazon Prime and I've just started the first season again. After all it really is that good.

The show originally launched before Amazon and Netflix were making TV shows, and it may in fact be the last great show of the pre-binge era. And given the way shows are made these days Justified's episodic nature may come across as a little dated, but there are a plethora of colorful recurring characters and a story arc that runs through the entire length of all six seasons. I'd go so far as to say that Justified is the best adaptation of Elmore Leonard's work to ever hit the screen. And that's high praise indeed.