Eastwood displays his thoroughbred status in The Mule 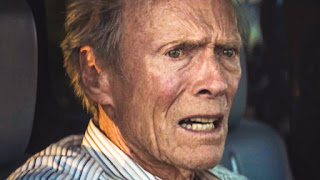 I've just gotten around to watching The Mule, last year's Clint Eastwood thriller that showed that even in his late Eighties, the actor can carry a movie and very much remains Hollywood's premier movie legend.

For someone who regularly watches old Eastwood movies it can be brutal to see just how old the actor really is, especially when you've been a fan for your entire life. Eastwood has always been craggy faced, even as far back as the Dollar movies but these days even his wrinkles are wrinkled. Still, he's not the only one - I was probably around ten years of age when I first started watching Eastwood moves, staying up late to devour Dirty Harry or Magnum Force on ITV back in the Seventies, and I'm into my Fifties now so I do hope that I wear my own wrinkles with the grace of Mr Eastwood. 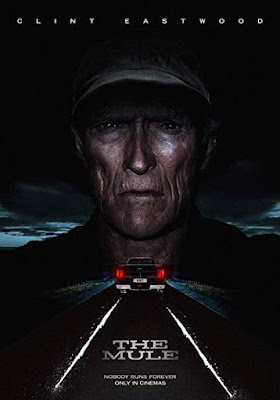 He's still the same old Clint, too touch for age to change him and one scene in this movie sees the ancient thespian enjoying a romp with two prostitutes. Thankfully, the scene cuts away from the main action but the implication that things went well enough, even without viagra, is quite clear. There are several scenes where Eastwood's characters is pushed around by a group of thugs and the viewer does long for \a scene where Eastwood punches out one of these thugs and asks him if ,  'are you feeling lucky, punk?'. of course that would be silly and The Mule is anything but silly.

In this movie, based on the true story of drug mule, Leo Sharp Eastwood plays aged gardener Earl Sharp who has fallen on hard times - his flower business ruined by the onset of the Internet who becomes a drug mule after meeting a drug runner who offers him an easy way to make money - 'all you've got to do is drive'. In the real life story Leo Sharp was a veteran of World War II but in the movie Eastwood's character is a vet of the Korean War.


And so using the story of Leo Sharp as a basis for the story Eastwood's movie changes the facts slightly for dramatic effect - in our film Sharp is estranged from his family and in the movie Sharp's ex-wife dies of cancer, which prompts Sharp to send the drug cartel into a frenzy when he rushes home mid-job with the back of his pick-up truck concealing a fortune in cocaine.

The Mule is a great slow burning movie; a typical latter day Eastwood movie though in truth Eastwood's career is filled with slower films that take their time in telling their stories - think of Honkytonk Man, the underrated masterpiece, for one and even further back something like, Thunderbolt and Lightfoot. The Mule grapples with several of Eastwood preferred themes including regret, forgiveness, mortality and the power of redemption, and is a grown up drama that proves the silver screen can be magical without explosions and lycra-clad heroes.

I for one thought The Mule was excellent, but then I may be a little biased since I fucking love Clint Eastwood.

Email ThisBlogThis!Share to TwitterShare to FacebookShare to Pinterest
Labels: clint eastood, the mule 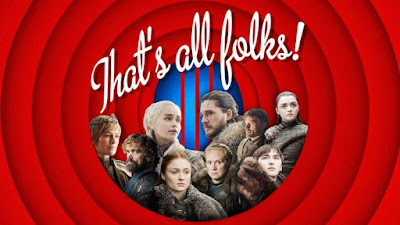 As I write, we are less than a week away from the final episode of Game of Thrones and I, like anyone who has been with the show since the start, am eager to see how this all plays out. At the same time the way the show's played out since season six has been a bit of a disappointment. There was a time when the show was character driven but since the show makers have run out of source material it's become action driven and there's been a definite sharp dip in quality.

If season 7 seemed rushed then season 8 has gone supersonic in its need to reach the end that George R R Martin envisaged.

I still love the show and will watch till the end but it is so very very disappointing given how groundbreaking the show has been - many of the major characters have suffered bizarre changes and the promise of many storylines have been thrown away - Jamie Lannisters redemption arc became a cheap joke at the viewer's expense, and whilst it may have been inevitable that Daenerys Targaryen become the mad queen it should have been built up to in a far better way - instead the program seemed to show her move from being a basically good person who cared about ordinary people, could not tolerate injustice and abhorred slavery to a crazy power mad harridan in the blink of an eye - 'Burn them all. Let them burn.'


The dragons too have been fucked up - at first they were treated almost like nuclear weapons, but as the seasons went on we saw they were vulnerable after two were destroyed and they were relegated to the status of effective military weapons and yet in the penultimate episode of the final season they, or rather it since there was only one left, became full nuclear and was able to destroy King's Landing without raising a sweat. It sure did look spectacular, though.

Over the last two season we've seen Daenerys Targaryen's army depleted after the battle with the Night King and her dragons paired down to one single creature. The show suggested an arduous battle for King's Landing not the walkover it eventually turned out to be - worse, it wasn't a even a battle but more mass murder on a grand scale carried out by some mad bitch on a dragon. This once beloved character has become  a mad bitch which is something that will surely annoy all those parents who named their daughters after the character. The name Khaleesi was given to 560 girls in the US last year, and in the UK there were 300 girls given the name. In total, more than 3,500 children have been named after her since the show began. A freer-of-slaves, mother-of-dragons and all-round badass, she won fans around the world but now that she's become a crazy murdering harridan those parents with little Khaleesi's of their own may be a little peeved. 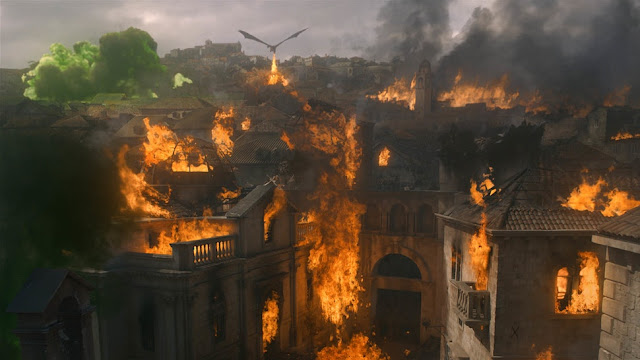 Season eight  has done a lot of work trying to balance out the forces of Dany and Cersei so that a real threat could be presented -  decimating the Dothraki and Unsullied and leaving  her with a single dragon. However, it turns out that  Drogon has aced some off-screen arrow-dodging training, and in one fell swoop destroys the Iron Fleet, and blasts his way into King’s Landing.

Perhaps the single most ruined character of the entire show is Tyrion Lannister - where are his witty remarks? He's gone in the last two seasons from being a giant of a character to a sullen little dwarf . He's become little more than a paperweight in a show that his character once carried. Other characters too have suffered - Bron's has just become a bore but at least the writers haven't used him much this season and given the way the story has played out I can't really see him turning up in the final episode - then again, he just might.

There was once scene in the last episode where I felt we were watching the old Thrones - in one of the early episodes there's a line that says when Jamie was born he emerged from the womb holding his twin sister, Cersai's foot. The way they died together, in each other's arms was I feel a fitting end for their characters, even if the redemption arc Jamie was set off on was a bit of a cheat.


As I understand it this was how Thrones was always going to end - mad queen, King's Landing, Jon Snow and all that that but since George R R Martin seems to be suffering writers block and failed to finish the books, the showrunners have had to work with just his notes. This, to my mind, makes the show feel like it is missing a true middle act.


I'll be watching until the end, and I still rate the show has one of the best TV series ever but it's not lived up to the promise of seasons 1 - 6. Ah well, I guess I'll just have to wait for Martin to deliver the final books to get a worthy lead up to an explosive ending.
at May 14, 2019 No comments: