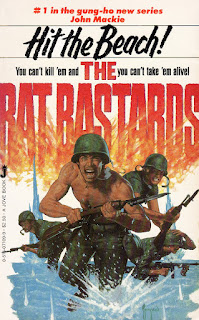 Originally published in 1983 under the name of John Mackie, Hit the Beach is now available for the Kindle under the author's own name of Len Levinson. The book comes from a period when slim (usually around 200 pages) paperback originals filled bookshops up and down the country. They were good times and I miss those days- these paperback originals came in all genres - westerns, war, thriller, crime. horror, SF and even if you were feeling daring, erotic. The books had no pretentions and all aimed to provide the reader with one thing - a bloody good story, well told. They were violent, often gratuitously so and there was a lot of rubbish among the good stuff and many of the authors from the period are still loved and read even today.

That's one of the great strengths of eBooks in that it allows long out of print titles to remain in electronic print to be rediscovered by old fans, and also to draw in readers too young to have been around when bookstores, newsagents and even the odd service stations stocked these quick, no nonsense reads. It seems that these days publishers demand novels come out the size of house-bricks, whether the story warrants the length or not. It's not the page count that matters you know, but rather the story itself.

As an old girlfriend once told me, size isn't everything! 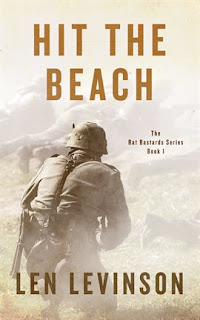 The Rat Bastards series, 16 books in all, was new to me  - Back when these novels were current I tended to read almost exclusively in the western genre, but I've heard good things about this series and so I tentatively grabbed a copy from the Kindle store. I'm glad I did and I've already started the second in the series.

The first book, Hit The Beach introduces the mismatched team of American soldiers as they arrive at Guadalcanal, and find themselves pitched into a harrowing ordeal of combat with a massive army of Japanese, or japs as the book would have it. It's gory and extremely violent, but the author has created several memorable, well drawn characters, who carry the larger than life action forward so that when the reader is within the fiction it never seems too far fetched but comes across as brutally real.

It's an episodic structure with no real plot as such, but amongst the fireworks the author manages to build on the main characters and bring them to life for the reader - none of them are in the square jawed heroic mould, they all have their flaws (boy, do they have their flaws) and they are all the better for it. The episodic structure also works really well in bringing the mayhem of warfare to the page and you can really feel the ordeal these men go through.

An excellent read and well worth seeking out.

Available as eBook and Audiobook.