Deadwood The Movie delivers a great ending to a TV masterpiece 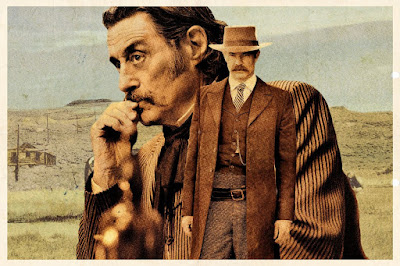 When HBO abruptly cancelled Deadwood after three excellent season, fans were left furious and immediately started making their voices heard and although it took HBO a long while to admit their mistake, it took a whole lot longer for Deadwood to return to the screen - 13 years in fact. And they've been thirteen long years with the actors having obviously aged in that time, some of them unrecognizably so and recognizing this series creator, David Milch moves the story forward to 1889 with South Dakota about to be granted statehood.

This is a great hook because it allows for character who left Deadwood to return for the state celebrations and seems perfectly natural. Of course, with such a time jump Milch has to imagine what those passing years have been like for the characters and he doesn't miss a beat, remaining true to each and every character as well as the original series. It's quite an achievement but five minutes into the TV movie and it seems as if the foul mouthed citizens of Deadwood have never been away.

The Deadwood series was unmistakably Ian McShane's show, but the movie very much belongs to Timothy Olyphant who puts in a great performance as the Wyatt Earp-alike, Seth Bullock but all of the characters shine in one way or another.  Gerald McRaney for instance is brilliant as the manipulative  George Hurst. But going back to Ian McShane's iconic Al Swearengen -  the story arc between McShane's character and the one time prostitute, Trixie is a vital element of this movie and it delivers wonderfully 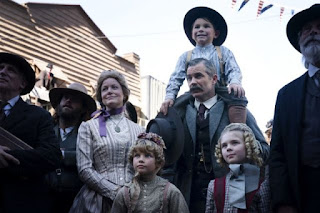 The movie, like the TV series,  also luxuriates in its dialogue, often lyrical and Shakespearean, which is  challenging to decipher. It always has been, but the reward for careful viewing is dialogue that challenges, surprises and delights.

“I’d not prolong the chewing up, doc, nor the being spat out — not go out a cunt.”

Deadwood originally came about during a golden time for televison, when networks including HBO, FX, and AMC debuted shows such as The Wire, The Shield, Mad Men, and Breaking Bad, and this TV movie wraps things up in an exciting and worthy fashion. There’s a particularly tragic tinge to the circumstances of the movie: Writer and creator David Milch recently revealed he was diagnosed with Alzheimer’s disease, making the entire affair feel particularly elegiac. Even so, this script is among the greatest things he’s ever produced.


Deadwood now has an ending and it's a brilliant one at that
at June 01, 2019 No comments: