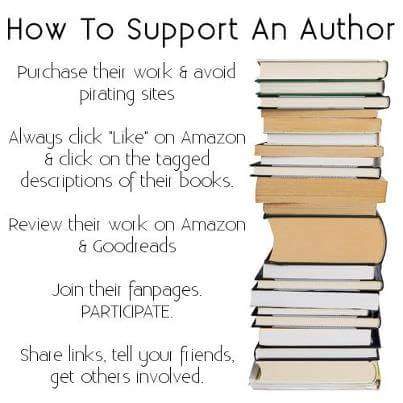 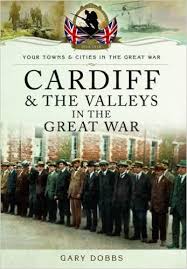 Two days ago I reviewed David Bowie's new album, Blackstar - that was Saturday and today, 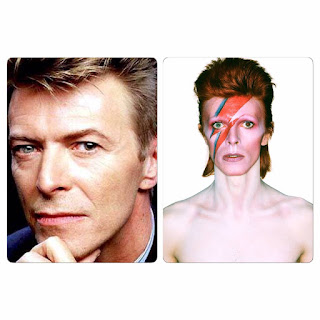 Monday I'm writing about his death.

Where the fuck did Monday go? Bowie asks on one of the songs on his new album, which seems to be a seven track meditation on mortality. It's an amazingly good album, but very bleak, black even and no doubt, Bowie, knowing the end was close, designed it to be his last word.

Something happened on the day he died, spirits rose a meter and stepped aside - Blackstar

Look up here, I'm in heaven
I've got scars that can't be seen
I've got drama, can't be stolen
Everybody knows me now - Lazarus, the second track on the new album. 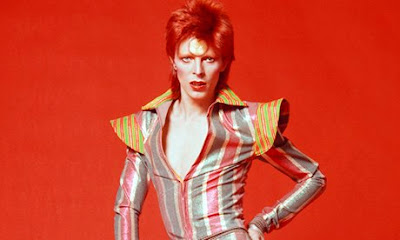 Bowie was, without any doubt, one of the most influential artists of the rock era. He is truly immortal like only a select few - John lennon, Kurt Cobain, Jimi Hendrix, Johnny Cash and  Elvis Presely all come to mind and Bowie's name will take rightful place besides these true icons, for each of them have left an imprint on music that has become a part of rock's DNA and not just in musical terms but in their very persona. There was something about these people that made them stand out, made them truly great. And Bowie was definitely a great.

Bowie lived the rock and roll lifestyle to the full - drink, drugs, bisexuality all played a large part in his life. It can be argued that the 1970's was his most creative decade with albums like Low, Ziggy Stardust, Station to Station, Hunky Dory and Diamond Dogs all cementing his position as rock's greatest innovator but albums that came after his golden decade were pretty damn good, in fact for Bowie it seemed as if his golden years never really ended. Scary Monsters and Super Creeps kicked off Bowie's 1980's  and although he entered a fallow period following this record, his 1983 album, Let's Dance was his most commercially successful - Let's Dance, to my mind, was too poppy and had none of the brilliance of his 1970's work, but it did yield several hugely successful singles in Let's Dance, China Girl and Modern Love. 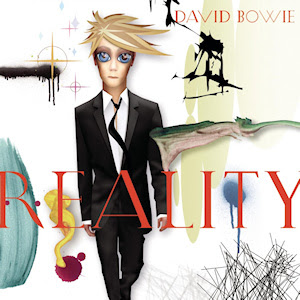 In the early 1990's Bowie seemed to turn his back on his solo career and instead became a member of Tin Machine, but although he intended the band to be a democracy it was the Bowie name that dominated. Bowie constantly shifted styles in the following years, scoring many successes but to my mind his next truly great album was 2002's Heathen, which was followed a year later by the even better (to my mind) Reality. One track on the album, Never Get Old just rocks as Bowie screams out, 'never gonna be enough money, never gonna be enough sex, never gonna be enough drugs.Never ever gonna get old.' But you know what - Bowie had gotten old and it suited him.


Then Bowie seemed to fade away and official word was that he had retired, while rumours did the rounds that he was seriously ill, dying even - He surprised fans in 2013 when he released a new album, the Next Day which sounded both fresh and at the same time a rollback to Ziggy era Bowie. His final album, Blackstar came out last weekend, released on Bowie's 69th birthday, and then he once again took fans by surprise by dying after secretly battling cancer for more than 18 months. NO doubt Bowie had planned for the last album to be released on his 69th birthday, all too aware that his own end was imminent. Bowie, it seemed, had died the way he had lived...on his own terms.


Bless you sir...you gave so much and we carry you in our hearts.
Posted by Gary Dobbs/Jack Martin at 04:47 1 comments 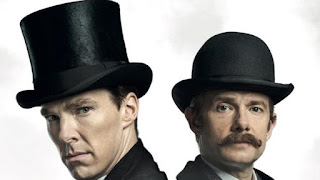 'Is it silly enough for you yet?' Moriarty asks somewhere around the half-way point of the festive edition of the BBC's. Sherlock.

Oh it's gotten more than silly. in fact it's quite daft...yet, somehow it's still compelling.

Deep down I know it isn't any good but Cumberbatch keeps me glued to the screen. There were good points of course - It was great to see the character in the proper Victorian setting, but as soon as the story got all Inception, jumping back and forth between time frames...well it lost me. Did the events in the episode actually happen? Was it all a drug induced trip for Holmes who has taken his seven per cent solution? Does anyone care?

What started as a traditional Victorian ghost story featuring Sherlock Holmes soon resorted to self referential bollocks, as timelines were torn apart, the promised program was mutated into something mirroring latter day Dr Who. Stephen Moffat and Mark Gatiss did a great job in bringing Holmes into the modern day but they ain't as clever as they think they are and this episode is an utter car crash. For one thing they cheated the viewer - this was no Victorian era set Sherlock as had been promised. 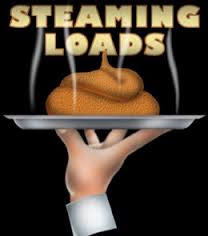 And for another they presented a real conundrum and then left it unanswered.

You see, one of us is thick...Either's it's me because I don't understand what
happened, or it is MoffatGattis for serving up a  steaming turd and calling it Christmas entertainent.

All I can say is I think it was all down to the women libbers. Least, I think that is what happened.

I'm still eager for the next series of Sherlock, but this special will be a lot to get over. I suppose I should watch it again to see if I can better understand it...but what would be the point? Once a steaming turd, always a steaming turd.
Posted by Gary Dobbs/Jack Martin at 15:07 5 comments 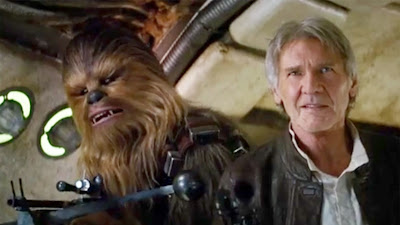 I intended on waiting for the DVD, but in the end the hype,  and the instances of my eleven year old daughter, got to me and I trundled into my local multiplex to view the latest Star Wars movie, The Force Awakens. I'm hardly what you could call a Star Wars geek, but I was 12 years old when the first movie came out and like most kids back in 77, I loved it - bought the comics, carried the lunchbox to school - that sort of thing. Over the years I must have seen Star Wars umpteen times and like most people I hated the prequel movies. In fact I can't really call myself a fan of the original trilogy, - well not fully. Since I don't like Return of the Jedi, finding it incredibly childish after the brilliance of Empire Strikes Back. But you know sitting there in the cinema, with incredibly low expectations born out of cynicism, I found myself feeling like that twelve year old kid again. The new Star Wars movie really is, in the words of that long gone twelve year old, superb and fabby!

MAJOR SPOILERS FOLLOW - Don't read any further if you've not seen the movie and don't want to know several of the major plot points, but the film's been out a few weeks now and I can't really explain what I liked about this film without talking over some  of the finer points. Firstly bringing back the original cast is the best thing about the movie, and tossing Luke Skywalker into the background and concentrating on Han Solo is even better . If both of these characters were given equal prominence then the new characters would have struggled to make an impact, but this time Han drives the movie while Luke's part is merely a cameo played out right at the end, just as the credits roll - this creates incredible anticipation for the next Star Wars movie. And of course Luke Skywalker was kind of a boring character next to Han Solo, who truly is the coolest guy in the universe. Next time Han won't be about to overshadow Luke and everyone else, so  it should be all systems go...no  that's Thunderbirds! I'm getting my ancient franchises all mixed up. 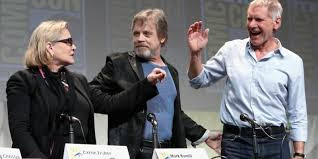 Harrison Ford is brilliant as the aged version of the character that originally made him a superstar - he's greyer. more wrinkled and a little slower but he's still the same old lovable rogue. He also steals every scene he's in - from the moment Han and Chewie take to the screen, this movie really comes alive. And - AND HERE'S THAT BIG SPOILER- when Han Solo cashes in his chips it truly is an emotional moment. I'm no longer that twelve year old kid that first fell in love with the intergalactic con man, , I'm a fifty year old guy with more than a few wrinkles myself, and yet the death of Han Solo brought a tear to me eye. My reaction, like Chewi's was astonishment and anger and I could have quite happily blasted the killer, Kylo Ren (actually the son of Han and  Leia) myself. I guess this is testament to the skill of the filmmakers but we have so much invested in Han Solo that his loss...well, it makes you feel bad inside, almost like you've lost someone real. And in a way we have - back in 77 we all went to see Star Wars, and for most of us the focus was on Han Solo. All the mystical mumbo-jumbo about the force was just filler...the real story was the adventures of Solo and his walking carpet Chewbacca. And so when Han Solo died it was as if a piece of that twelve year old I'd once been, had died with him. Here lies innocence and a belief that movie characters are immortal. 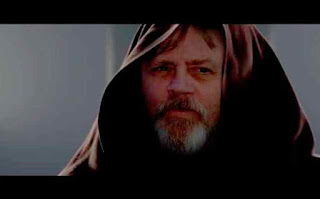 The new cast members, Finn and Rey who are intended to be the new blood  are superb and no doubt the younger viewers (the true audience for this movie) will latch onto them, but for all us ageing viewers the focus is on the old timers, - the originals you might say. And Luke turning up at the end, looking not unlike the way we first saw Obi Wan in the original Star Wars,and not even getting a single line,  gets us all revved up for the next movie. Yep Han Solo is dead but hey, life goes on and we want to see if this aged version of Luke Skywalker has any balls. This character who spent most of the original movie wanting to shag his sister. admittedly he didn't know at that point that she was his sister, is going to be the focus for the next Star Wars movie. His sister, Leia of course will also be a part of that next Star Wars movie, but she did so little in The Force Awakens, that she wasn't really important and might as well have not been there at all. Let's hope they give her more to do next time, but please don't get her back in that bikini from Return of the Jedi - a fully clothed Leia is a better option... and who, would have  thought I would have ever said that!