The Irishman is a gold standard mobster flick.....

The Irishman opens with a shot that calls to mind another Scorsese materpiece, Goodfellas - the latter used a voyeuristic camera to track behind Henry Hill as he parades his new girlfriend through the neighbourhood, all pastel shades and slick jet black hair. It was a scene that celebrated youth and mob culture. It was a celebration of a way of life that was abhorrent to right minded people and yet at the same time strangely alluring. And now comes the opening shot of The Irishman which turns that scene on its head by creeping through a Catholic OAP home, meandering past wheelchairs occupied by men with ancient lines upon their faces, dim soon to be extinguished glows in their eyes, snakes around orderlies to come to rest on the aged face of Robert De Niro in the role of real life gangster, Frank Sheeran - the man who actually confessed to killing union boss, Jimmy Hoffa. It's a scene that laments the inevitability of aging and perhaps pines a little over the extinction of the old school mobster. The stylishly suited, slicked back but ultimately deadly wise guys have gone, been replaced by gold toothed, bling dragging, steriod chested thugs.

The Irishman is based on the book,  I Heard you Paint Houses (a euphemism for splattering blood over the walls) by Charles Brandt which was the story of mob enforcer, Frank Sheeran. Before Sheeran died in  2003, he confessed to his part in the murder of Jimmy Hoffa, claiming to have redecorated the walls with his brains and this confession provoked an FBI investigation. The ensuring investigation revealed that blood splatter was found in the house where Hoffa was supposedly murdered but being thirty years old, the DNA was unable to be conclusive. Officially the FBI have never closed the case but the story depicted in the book and now the film seems entirely credible. 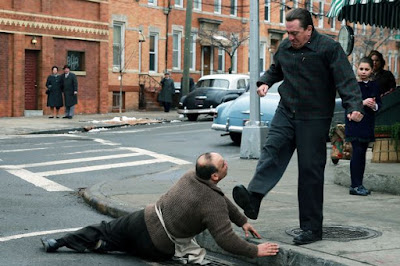 Back to the movie though - It is quite excellent and doesn't feel like its mammoth running time, giving that the audience are in the hands of absolute masters both in front of and behind the camera. It's great to see De Niro and Pacino, two of the finest actors in the world, sharing so much screen time ( I remember the excitement when Michael Mann's brilliant crime thriller, Heat was first released. Part of the thrill was finally seeing De Niro and Pacino on screen together, sharing scenes but as good as the movie was it was dissapointing that their time on screen together was so brief) and marveling at the way each performance feeds the other. De Niro is somewhat subdued in his portrayal of the average working stiff who finds himself elevated to professional criminal, whilst Pacino turns his Jimmy Hoffa up past eleven. Both performances are pitch perfect - likewise with Joe Pesci who provides a brooding grandfatherly figure,a man who is both endearing and sinister as mob boss, Russel Bufalino.

Director, Scorsese recently stirred up controversy when he stated that Superhero movies, specifically Marvel movies are not really cinema at all -  “I was asked a question about Marvel movies. I answered it. I said that I’ve tried to watch a few of them and that they’re not for me, that they seem to me to be closer to theme parks than they are to movies as I’ve known and loved them throughout my life.” - well, the Irishman is the most persuasive addendum to Scorsese's argument yet. There is a real sense of danger in this movie, of people who come across with the trappings of real life. So is the Irishman better than any of the Avengers CGI- fests? Of course it fucking is! What kind of fucking schmuck asks a question like that?