Warner Brothers have made some excellent superhero movies in animated form, and in terms of realising the source material most of these movies are vastly superior to last year’s Batman V Superman movie. Perhaps animation is far more suited to the medium, a far truer way than live action of bringing the comic books to life. There’s a lot of evidence for that stance – as good as Christopher Nolan’s Batman trilogy was,  none of the films matched up to the 1993 animated movie, Mask of the Phantasm....FULL REVIEW
at July 26, 2016 1 comment:

Any series looking at the greatest TV westerns would have to include the short lived, Sam Peckinpah produced series, The Westerner. There were only ever 13 half hour episodes made, due to low ratings (the show aired against ratings winners, The Flintstones and Route 66), but over the years this series has built up hordes of fans. It was as unlike the then current day western TV hits a it was possible to be - Where Bonanza and others of that ilk dealt with family matters out West, the Westerner centred on a drifter who only ever formed lasting emotional attachments with his animals - David Cameron jokes can be inserted here.

The Westerner although not a ratings success scored highly on critical approval - The show was ground-breaking in its willingness to explore nuance, and bring some realism to the western; that most romanticised of genres. Instead of the usual character, Bryan Keith's Dave Blassingame is a recognizable human being. He's a drifter-- dusty from the trail. He can't read or write, likes to drink and brawl  and has no other purpose other than to wear his saddle down with his constant wandering.
at July 25, 2016 No comments: 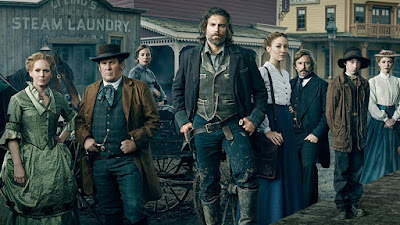 AMC's western series, Hell on Wheels finally came to its conclusion this week with the completion of America's transcontinental rail-road, and it ended in grand western style with a fist pounding saloon punch up, and enough tying up of loose ends to hold the five seasons together.

'You're a soldier, lost without a war to fight.' President Grant tells Cullen Bohannon as he offers him a post in the American army, fighting hostile Indians and protecting the rail-road he helped to build. 1,907 miles of track and viewers have been along for each and every blistering mile. And it's been a hell of a ride.

When the show started Cullen Bohannon (Anson Mount) was a vengeful one time confederate soldier with only one thought - to gun down the men responsible for killing his wife and son. - by the end of the five seasons he is still very much alone and ends his quest by taking a trip across the sea to China to be reunited with the woman he hopes to finally find lasting happiness with. The first episode started off in 1865, shortly after the killing of President Lincoln, and find Bohannon hiding in the shadows while he searches for the men who did him wrong. A series of events culminates in him being hired by the Union Pacific Railroad and working under the shady Thomas Durant - an historical figure given life by the wonderful actor, Colm Meaney.


Durant is as important a character to the show as Bohannon and he carries many of the episode -Meaney's wonderful, often OTT, perfomance vividly brings the historical character to life...or at least a version of that character.

He even sums up the show in his monologue to congress in the very final show - 'Truths delivered by lies are no less true.' 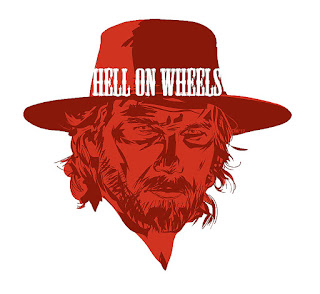 Overall I've enjoyed this series, not minding the odd historical inaccuracies, and yes it has been a hell of a ride. A well written, brilliantly acted, stunningly photographed western series. What more could you want!

Email ThisBlogThis!Share to TwitterShare to FacebookShare to Pinterest
Labels: Hell on wheels.westerns

This is the final book in Stephen King’s Bill Hodges trilogy – The first book Mr Mercedes (find my review HERE) took his fans by surprise as it took the author away from his usual horror/dark fantasy genre into the crime field. Though it shouldn’t really have come as a surprise since King has been in and out of differing genres for many years now, and it’s been a long time since he could be tagged as solely a horror author. However the book was billed as King’ FULL REVIEW HERE