The Comics at War Part One: The Early Days 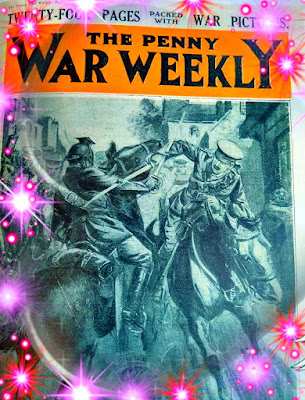 Recently whilst reading the latest titles from DC Thomson's Commando Comics, a series of titles that have been running for longer than I've been alive, I was struck the realization that war stories have been a staple of comic books for as long as the medium's existed. It is said that at any point in time, on some foreign field, the British Army is fighting one war or other, and I suppose in many ways British history has been shaped by events on the battlefields. From Lionhearts crusades to the current struggles in Iraq and Afghanistan, stories have echoes down the centuries and inspired poets, novelists, storytellers of all kinds.

So it would seem natural that children's literature, the forerunner of the modern comic book, would turn its attention to war stories with early titles such as Boy's Own Paper, and Halfpenny Marvel churning out tales set during the Crimean and Napoleonic Wars. It is interesting to note that early war comics and story papers concentrated on war at sea which reflected Britain's pride in having a Navy that then truly ruled the waves.

War stories were part of a mix of tales that included sport, crime, western and adventure but by the end of the Nineteenth Century, with the country gripped by the wars against the Boer, comics and story papers started to present patriotic tales with these struggles as the backdrop. Fictional stories would sit alongside reports of true accounts of heroism and gradually comic books and the story papers became part of the national consciousness. 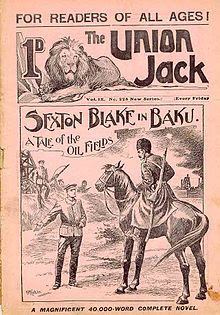 The real boom started in the mid 19th Century when the literacy rates were rising in Britain thanks to the sterling work done by social reformers, and when William Gladstone, then the Chancellor of the Exchequer, abolished duty on paper mass market publishing was able to come about. A number of entrepreneurs turned their attentions to the growing boys fiction market. Kids across the country, unable to find X-Boxes or Playstations in the shops, were eager for entertainment. Cheap fiction was hugely in demand by working class children who could not afford to buy books - Alice in Wonderland for instance which was first published in 1865 cost 6 shillings. This was a third of the average industrial worker's weekly wage. However children could manage a penny a week and this brought in the era of what would become to be known as the penny dreadfuls.

A popular title of this period was The Boys of England which sold, at its peak, around 250,000 copies a week but given that each copy wold be shared by around nine different readers it was estimated that its readership was more than two million.

Edwin Brent started his Newsagents Publishing Company in 1866 and as well as being responsible for the aforementioned The Boys of England, realized that there was a market for more salacious reading material, and he started churning out the first penny dreadfuls. These magazines were, in effect, part work novels which subjects that covered murder, street violence and other lurid subjects. Brett's published, The Wild Boys of London in 1866, which was a tale of juvenile street criminals in the capital city and this title became particularly notorious. It contains violence, mentions of nudity and a flagellation (torture) scene and it sold like the proverbial hot cakes and started the boom in the penny dreadfuls,  which would soon come to the attention of politicians. 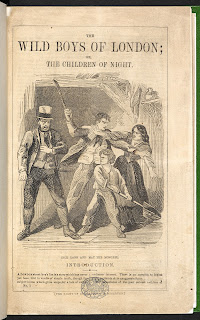 'The malign influence of the "bloods" (penny dreadfuls) was creeping not only into the houses of the poor, neglected and untaught, but into the largest mansions; penetrating into religious families  and astounding careful parents with its frightful issues.'  Lord Shaftsbury, speaking in the House of Commons in 1878.

A moral backlash followed and fearing that soon issues would be forced out of publication, many publishers started to clean up their act. In 1879, the Religious Tract Society first published, The Boy's Own Paper, which would go onto become one of the most enduring and popular of boy's story papers. The first issue featured sport stories, adventure stories and for the first time in a boy's magazines, stories about the perceived glories of warfare. There were also features on hobbies, nature and health. One story, From Powder Monkey to Admiral, started in the early issues and across its run told of how an ordinary boy from the working classes joined the Navy and gradually worked his way to the highest rank. This may seem unlikely but, in fact, history proves otherwise and the story was very much influenced by the life of Admiral Edward Hopson, a boy of humble stock who did indeed attain the rank of Admiral.

War stories then were a stable of The Boy's Own Paper from its early issues. Largely these stories told of The Crimean War (1853-1856) or the Napoleonic Wars but there were stores that dealt with the French (1793 - 1815) and the Indian Mutiny of 1857. All of these stories were driven by a feeling of patriotism and national pride, but did not always seen things from the British perspective. One story, The Drummer Boy (1881) told of a yound boy conscripted into the French army for Napoleon's ill-fated Russian campaign of 1812.

In 1880 another titles was published. The Union Jack was billed as a magazine of 'healthy, stirring tales of adventure by  Land and Sea for Boys'. It was priced at one penny and it was hugely popular and offered strong competition to the Boy's Own Paper. Most of the stories were set in previous wars but the magazine did become the first title to set stories on campaigns which were then ongoing. In 1882 the magazine published a story that looked at the Sudan Campaign. Readers lapped the magazine up but after 129 weekly issues it ceased publication. However by this time there was no shortage of for British readers and new titles were launched at a speedy rate. These magazines, lavishly illustrated,  were all text based stories, and the dawn of the first true comic was still some way off but it was these magazines that were very much the parents of the modern comic book. 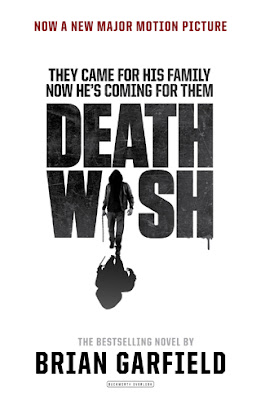 I was familiar with the Charles Brosnon/Micheal Winner movie (who isn't!) , but until now the original source novel by Brain Garfield (an author known previously to me for his many excellent westerns) had passed me by.

I picked up this novel for my kindle on a whim; having come across it whilst browsing and I very much enjoyed it. It's basically the same story as the movie it inspired, and it also justifies the actions of the vigilante that drives the plot in a similar fashion, but it contains much more depth than the the movie and leaves the reader empathizing with Paul Benjamin (Paul Kersey in the movie) and fully understanding, if not applauding him for bringing a kind of wild west gun juctice to the criminals who are ruling the streets of 1970's New York.

The novel fully gets inside the character of Paul Benjamin and shows us how an accountant, a life long liberal can step over that line and become the ultimate in right wing rhetotic - judge, jury and executioner. Much of the novel concentrates on the mundane aspects of the main characters life and his transition to madness is fully realized in a believable fashion.

It's not as nasty as the movie it spawned, and for that even more compelling, and it sense of time and place is vivid. I'd highly recommend this book.
at July 30, 2019 No comments: