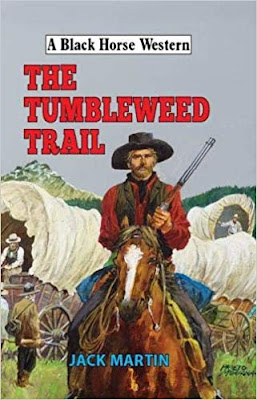 To celebrate the release of my new western, The Tumbleweed Trail - to be published this January  by Black Horse Westerns and available now, I thought I'd post a little something about the man who gave me my pen name.
And so I present the real Jack Martin
Jack Martin. The man whom I looked up to as a kid, he seemed ten feet tall, and the man whose name I use for my western fiction.
Jack Martin was a coal miner in the South Wales coal fields - indeed it was the dust from this environment that eventually killed him - pneumoconiosis, black lung disease,was common among a certain age group in the village I was raised in and the sound of chesty coughs often accompanied the dawn chorus.

Coal mining with the then primitive conditions was a  arduous job and in those days there was only basic safety equipment. Lives were often lost in explosions and one time the level where my grandfather was working flooded and over 20 men were drowned. That was all before and I learned much of this from my grandmother and Gramps never really talked about it.
I was born in 1965 and Gramps had retired by the time I was five so I can't really remember him working. He was a tall man, always dressed immaculately, even when doing the garden he wore a shirt and tie, as people of his generation did. He grew the best tomatoes around and my first ever paid job was collecting horse manure from the mountain for his garden. I think he gave me something like 10p a bucket which was good money in those far off days when the world was black and white and the sun always shone.
My Grandmother often referred to him as Father Christmas and although they would argue as people did in those days, about anything really - leaving the door open, not wiping your feet and trampling garden over the mat, their relationship was a strong and loving one. They both spoiled me rotten and I always got the latest comics and would go on the annual British Legion day trip to Porthcawl with them. Though often only me and my nan went. Gramps stayed home and probably went for a sneaky pint down the legion. He did so like a sneaky pint or two.
Hey, sorry about the ancient history but I feel almost old enough to remember black and white radio.
Gramps loved the westerns and was always reading a western novel. When there was a western on TV I would watch it with him and he would tell me stories of when he was in the wild west (completely invented, of course. The furthest West he ever went was Tonypandy) and in these stories he would be teamed up with John Wayne or Gary Cooper but never Clint Eastwood - he never really liked him and would refer to him as an unshaven hooligan. As a young boy I believed every word of these wild stories.

Gramps was a natural storyteller.
Jack Martin - it was his  love of westerns was passed onto me and apart from the fact that Eastwood is my all time fave, our tastes are very much the same - John Wayne is still the ultimate man's man, and the cowboy creed is  a design for life.
When I published my first western novel, Tarnished Star with Robert Hale LTD I was proud that it contained the byline - by Jack Martin. When trying to decide on a pen name to keep my western fiction separate from my other stuff it was only natural to use Gramp's name.
He's been gone now for close on forty years and I still miss him but I guess he's still here, inside me - his ideals, his ways, his humour and when Tarnished Star by Jack Martin finally sees print it is as much his work as mine. For without him I would never have developed my interest and love for the American West.

So saddle up and check out Jack Martin's western page HERE
at December 14, 2018 No comments: Email ThisBlogThis!Share to TwitterShare to FacebookShare to Pinterest
Labels: cardiff and the valleys at War 1939 - 1945, gary dobbs 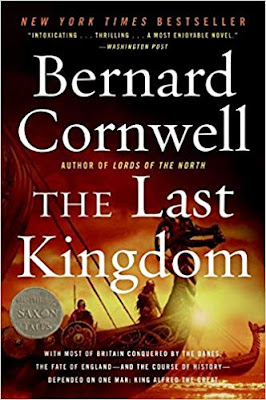 I've read several Cornwell books over the years, but the historical fiction genre is something that I only dip into from time to time - in fact, I think the last book I read by this author was Stonehenge which I remember really enjoying and so looking for a change of pace I picked up The Last Kingdom from my TBR pile.

I knew nothing of the BBC TV series when I picked up the book (though I this last few weeks binged watched all three seasons) and I'm kind of glad since the story came to me fresh - or at least as fresh as a story so heavily based on actual historic events can be. After all, we learned all about Alfred the Great and the Saxons at school, so I had a basic knowledge of the period and the established facts. However after reading the book you have the sense of having been there, for whilst you travel between the covers you are indeed transported to Wessex, Mercia and beyond.

And that, I think, is  Cornwell's biggest talent - he holds an  immense skill in creating readable stories, and pushing his  research and knowledge into the background so that the action drags the reader into this world. Before  you know it you are completely enthralled in the world of the books and it's as if you are there in Wessex, experiencing the day to day life of the characters. So faithfully does the author transport you to a time and place that the reader might as well have been issued with a passport - that 9th Century England stamp will sure stand out between the stamps for two weeks in Ibiza, during which I dined that fat bird while the warm sea breeze blew through our hair three years ago,  and next year's trip to the States when I, no doubt will entertain an equally voluptuous bird or two. Hey, I'm nothing if not an optimist.

The book starts in the year 866 with Ulthred, then still called Osbert. He is, at this point nine-years-old and it is his older brother who took his father's name. During the day the elder brother is killed by Danes and so Osbert becomes Ulthred. The story then moves forward until almost a year later when Ulthred is almost ten years old and find himself going to war for for the first time. 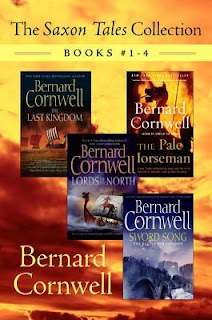 Young Ulthred expects to fight in the shield wall but he is told by his father that he will not, he is told that he will watch and he will learn, and throughout the book the shield wall becomes something of a metaphor for the journey to manhood. For although Ulthred faces and overcomes considerable dangers throughout the story it is not until he finally fights in a shield wall in the closing sections of the book that he truly considers himself a warrior. But it is during his first experience of war that his father and their fyrd are completely wiped out, and he is taken away by the Danes.

Ulthred is at first treated like just another slave but soon he gains a new father in the Dane, Ragnar who treats his well and as the years pass, the young grows towards adulthood and begins to consider himself more Dane than Saxon. However Ulthred will soon follow his destiny and end up serving King Alfred in his many battles against the Danes as the visionary Saxon King sets about the long task of achieving a unified England.

The author uses many of the events depicted in the Anglo Saxon Chronicles to give his series a sense of reality, buy he is constantly aware of the need to tell a good yarn, to keep the reader turning the pages and he does this so well - as a writer myself, I'm envious of the author's talent in delivering a house-brick of a book that doesn't outstay its welcome, and indeed leaves the reader eager for more. 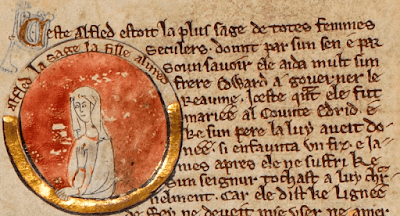 Apparently this series of books has only recently been re-named the Last Kingdom series because of the success of the TV series - they were originally published under the collective: The Warrior series, and as soon as I closed the covers on The Last Kingdom, I immediately turned the first page of the second book in the series, The Pale Horseman so expect a review soon.