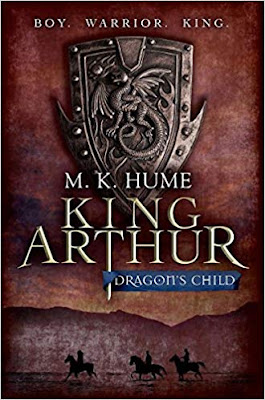 "Perhaps my love for the legends was because my husband shares a name with the venerable hero. Perhaps, I was just so upset because the story had become so bastardised over the years that I decided to put my own mark on it. And perhaps I wanted to honour human courage rather than magic. Whatever the reason, I am certain that there are so many stories in the great sweep of history that are so vivid, compelling and riveting that I will never lack for subject matter." M K Hume, talking of the Arthurian legends.

I came across this book by happy accident - it was mistakenly placed among a pile of old western paperbacks that I picked up from a musty old secondhand book shop - as well all know musty old shops are the best kind of secondhand book shops. I started reading the book and before I knew it I was fifty or so pages in and hooked - the book tell of Arthur's (Artor as he's called in the book) early life and of his rise to the position of King of the Britons. The Arthur legends are of course just that - legends and no-one knows if he really existed at all.He first  appeared in print in the writings of Welsh historian, Nennius who gave a list of 12 battled in which the fabled king fought. In the 12th century, Geoffrey of Monmouth wrote the first life story of Arthur and it is here that Caliburn, the magical sword commonly called Excalibur first appears. So did Arthur exist? Who knows but someone certainly kept the invading Saxons at bay for a great many years. In fact all that can be said with even  the least degree of certainty is that sometime in the fifth and sixth centuries, someone called Arthur or Arturus led a band of warriors who fought a resistance against the invading Saxons,Jutes and others from the north of Europe.

M. K. Hume's epic tale uses the voice of historical fiction rather than fantasy, and the Celtic world is vividly brought to believable life - magic doesn't play a part in this story and indeed the wizard, Merlin is here a master strategist, which makes the book all the more believable and fits in with the convincing historical context. As does the author's take on the sword in the stone legend, and immediately upon finishing this book I  took a trip up the Amazon and downloaded, Warrior of the West, which is the second book in the Arthur trilogy. I'm currently reading that book on my all new Kindle Paperwhite (expect a review of the newest Paperwhite soon) and this book is even better than the first so there'll be a review of the second part, and no doubt the third, appearing on these tainted pages very soon.