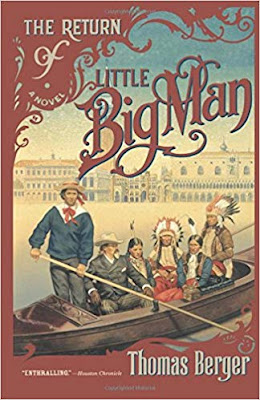 After recently reading and loving the novel, Little Big Man I had to dive straight into the sequel, which was originally published back in 1999 - It turns out that Jack Crabb faked his death at the end of the Little Big Man novel in order to get rid of that pesky journalist, and now he's back, at 112 years of age to narrate the rest of his story into one of those new tape recording machines. And the book, like its predecessor is an absolute delight.

"I had had my own grievance against Custer, whose attack on the Cheyenne camp on the Washita, years earlier, had resulted in the loss of my Indian wife and child, and thought for a while I'd kill him if I could, but I never got the chance, and now that somebody had done it with no help from me, I both lacked a feeling of satisfaction and a sense of purpose as to what I'd do with the rest of my life."

-- from the first chapter of 'The Return of Little Big Man'

Narrated of course in the first person; a chatty style as if Crabb is narrating his story onto tape for future generations, and the end of this one is absolutely excellent and both definitively finishes the story, while somehow leaving it open for yet another volume. Though with the author having died, Patrick Bergar that is not Jack Crabb at the young age of 89 back in 2014 it seems that the story is now over.

Once again Jack is as hand to witness historic events in the old West - Hickock's murder, of which Crabb sees himself as responsible, the gunfight at,, or rather close to the OK Corral and the murder of his good friend Sitting Bull by reservation police in 1890. He's also at hand when Queen Victoria comes out of a quarter of a century mourning to see Buffalo Bill's Wild West Circus, of which Jack is a part. Other historical figures come in and out of the book - Annie Oakley, Calamity Jane, Bat Masterton and Libby Custer to name but a few.

I loved this book and found it even better than Little Big Man - this time Jack's wanderings take him over a far larger canvas and the comedy is far broader, though never slapstick and always believable. For instance once scene in which Jack buries his beloved dog, Pard is absolutely heartbreaking but suddenly becomes insanely hilarious when the dog, very much alive and having dug itself out of its early grave, comes padding up to him. I won't give away the details of this scene but I will say that it works so well that, I think I shed a tear at the death of the pouch. I know I laughed out loud when it was revealed that he hadn't been dead  but......well, I won't give it away but will say that Pard doesn't seem to harbour any ill feelings to his adopted master for having prematurely buried him.

There are so many other highlights in this superbly crafted story - I've only ever read two Bergers books, this one and the volume that came before, but he seems to me as a kind of Mark Twain for the modern age. I guess I'm going to have to check out his other books.