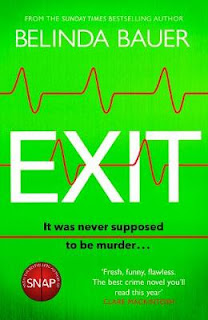 Belinda Bauer is marketed as a crime writer, and yet she is only a crime writer in the sense that Stephen King is a horror writer, for like Mr King Belinda transcends a genre which is unable to contain her. Her previous book, the Booker Longlisted, Snap was one of the darkest and yet most heartwarming books I've read for many years and I raved about it to anyone who would listen. Her new book is much lighter in tone than the aforementioned masterwork, though it does concern a murder most foul. Trouble is it's the funniest murder any reader is likely to come across in all crime literature.

The cleverly constructed, ever so twisty plot concerns an organisation known as the Exiters - a group of kindly people who sit with terminally ill patients who have decided that suicide is the only way out of a life that has become nothing but misery and extreme pain. The exiters don't provide assisstance in the act of sucide but merely offer support when it is most needed - these people know how to stay on the right side of the law.

The book opens with 75 year old Felix, an experianced exiter and a young girl called Amanda (all good eyebrows and no experience) turning up at an address to aid in the suicide of an elderly man who is being tortured by cancer. However all is not as it seems and Felix and Amanda are horrified to discover that they have killed the wrong man. Felix being the noble sort decides to take the blame himself and keep Amanda out of it, but first he has to decide when to hand himself into the police but not, of course until he'd walked his dog.

What follows is an often hilarious thriller that keeps the pages turning as one unlikely event follow another until the final, didn't see that coming denouncement. In places the plot reminded me of Tom Sharpe, in others Agatha Christie but at the end of the day the book comes from an original voice and one of the most widly creative in all of the crime genre.