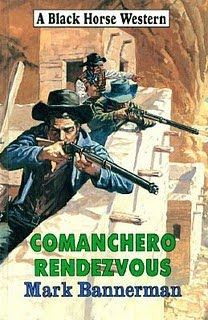 COMANCHERO RENDEZVOUS
as by Mark Bannerman
A Black Horse Western from Hale, 1999
Major John Willard is sent on a special mission by the president himself. This will take him to the Staked Plains of Texas, a region both repellent and menacing, a land of death inhabited by Indians and outlaws. Well hidden within its wildest depths is the stronghold of an embittered band of ex-Confederates. Even though the Civil War is over they continue to fight on by inciting the Indians to attack the Federal Army. Willard’s mission is to bring peace to the region.
This author (Anthony Lewing writing as Mark Bannerman) doesn’t believe in making life easy for his hero, even before the mission has hardly begun the complications set in. It seems that people other than the president have an interest in the outcome of Willard’s mission, such as Edward Sanderson and his mysterious jade-eyed daughter Lauretta, and soon he’s plunged into a world of dark secrets that make this book compelling reading.
Willard isn’t the perfect hero either; he makes mistakes, bad mistakes, which put both his mission and life on the line more than once. It’s also good to see that the usual hero meets girl and they fall in love and live happily ever after doesn’t turn out that way which adds to the elements of surprise and twists and turns of the story. MORE
at January 30, 2010