Herne the Hunter 3: The Black Widow

Herne the Hunter 3 can be found HERE in an all new eBook edition.

This was the third book in the western series that eventually ran to 24 novels between 1976 and 1984. These series was a part of the boom in paperback westerns that was kicked off by the incredible success of George G Gilman's Edge series. All of the books were very much influenced by the spaghetti western movies and followed a similar stylistic approach.

Herne book 3 completes the original storyline that first set Herne off on the vengeance trail.

When we first met Herne he was a peaceable man who only turned back to his guns when his wife killed herself, after being brutally raped and beaten by several men. Herne then took off after these men and three books later he finally puts the last of these men in the grave.  It's been great fun getting to this point, and at then end of this book Herne's future is left uncertain. The character has certainly developed over the three novels. The climax of this book, although brutal, does leave the character for some hopes of a future without violence, perhaps settling down with Becky, the daughter of a friend who has been with him throughout his long walk down the vengeance trail. 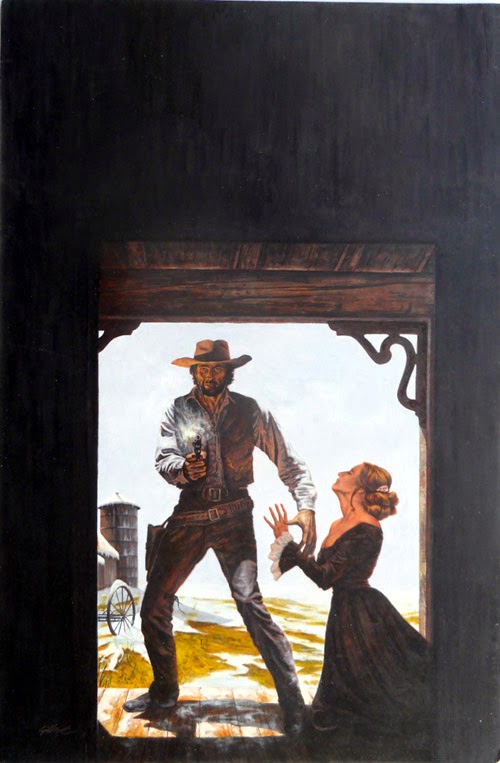 I really enjoyed this book and felt that it had just the right balance of the believable and the downright ridiculous. Some sections of the book are positively gothic  - the Black Widow character of the title, although not fully explored, means that the story is often moving away from Sergio Leone and towards Dario Argento. There are some truly perverse scenes in the book, but all the time the story is truly compelling and keeps the reader turning the electronic pages.

A snowy setting is used, a nod to Corbucci's classic spaghetti western, The Great Silence and the character of Whitey is obviously a borrow of Loco, the albino character played so effectively in Corbucci's movie by creepy old Klaus Kinski. In the book the character of Whitey is a strong point because it allows for the Herne character to regain some of the humanity lost in the previous two books. Initially Whitey is out to get Herne, but they end up working together to defeat an altogether greater enemy. I also enjoyed the development of the Becky character in this book  and it is unclear of how her relationship with Herne will develop over the next few books. Herne's initial feelings for her seem paternal but there are hints in this book that their relationship may become romantic. If there is one weak point in the story it is with the Black Widow character herself, - she is built up really well but her full potential is not fully realized. She does come to a suitable end but I found her to be such an interesting character that I expected so much more from her. Still minor niggles...a great read.

The Herne series has been out of print for many years but thanks to the excellent digital publishing house Piccadilly Publishing the books, as well as other excellent titles, are getting a new life on eBook. Check out Piccadilly HERE.

Posted by Gary Dobbs/Jack Martin at 02:58