Looks at the Cardiff Pals and other local regiments who fought in the Great War and how the experience of war impacted on the area, from the initial enthusiasm for sorting out the German Kaiser in time for Christmas 1914, to the gradual realization of the enormity of human sacrifice the families of Cardiff were committed to as the war stretched out over the next four years. An important place for Coal export this book looks at how the balance between working and fighting was achieved by the Dockyard workers The Great War affected everyone. At home there were wounded soldiers in military hospitals, refugees from Belgium and later on German prisoners of war. There were food and fuel shortages and disruption to schooling. The role of women changed dramatically and they undertook a variety of work undreamed of in peacetime. Meanwhile, men serving in the armed forces were scattered far and wide. Extracts from contemporary letters reveal their heroism and give insights into what it was like under battle conditions. 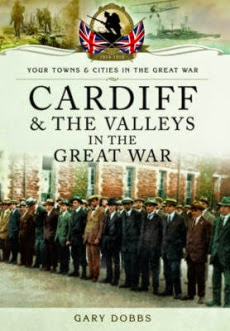 Posted by Gary Dobbs/Jack Martin at 12:57

Email ThisBlogThis!Share to TwitterShare to FacebookShare to Pinterest
Labels: cardiff and the valleys in the great war, gary dobbs, world war 1