Keep Calm and Read On 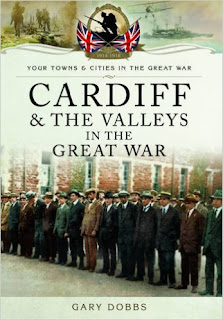 Following the success of my book, Cardiff and the Valleys in the Great War , the publishers commissioned a follow up to be entitled Cardiff at War 1939 - 1945. As you can imagine the book requires a lot of careful research and recently while going through news archives I found a newspaper article from January 1940 that I'd like to share here.

It seems that during the early years of the war there was a spike in reading - I'm not sure if this was nationwide but Cardiff library found itself incredibly busy. So much so in fact that the library collected together its data and told the South Wales Echo of its most popular titles. 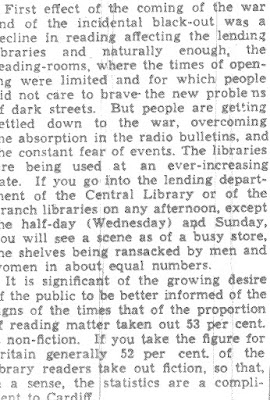 Black Out Makes Cardiff Read More, the newspaper headlined. which means there must have been a lot of candles burning behind those black out curtains. Though as of yet I've not found an article on the spike in candle sales  - Escapist fiction was understandable extremely popular, as was Richard Llewellyn's beautiful How Green was my Valley - apparently people who saw the hardships of the coal mining industry first hand also enjoyed reading about them. The public were also very keen to educate themselves on the background of the crisis in Europe and books about Germany and Hitler in particular were hired out often. Hitler' s Mein Kampf was eagerly read, as was Hitler Speaks which reproduced a lot of the mad little Charley Chaplin impersonator's speeches.


There was also a revival in classic literature and Wuthering Heights was particularly popular.

As a book lover myself, a constant reader I took great pleasure from reading the article, and it's nice to think of all those people hunched over a book in the dimness of the black out - I wonder what they would have thought of the Kindle Paperwhite?

Cardiff and the Valleys in the Great War (Pen and Sword Books) is available now in both print and electronic formats. Check it out by CLICKING HERE

Posted by Gary Dobbs/Jack Martin at 05:43

Email ThisBlogThis!Share to TwitterShare to FacebookShare to Pinterest
Labels: cardiff and the valleys in the great war, gary dobbs, world war one, world war two

I'm assuming the public didn't get enough info on the war, etc., over the radio and felt compelled to dig further to get a more complete story. Interesting.