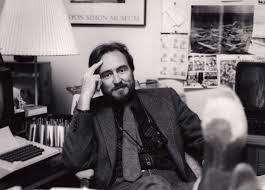 For a period from around the early 80's to the mid 90's director Wes Craven was, at least in horror movie terms, considered one of the best movie makers in the world. As  a teenager I lapped up his output with flicks such as A Nightmare on Elm Street, The Hills have Eyes and even The People Under the Stairs. These movies fulfilled a teenage need for celluloid thrills. Craven became a superstar in genre terms and he was always sought after for interviews in film magazines. His best known movie was probably the original Nightmare on Elm Street though ironically his highest grossing was 1996's Scream - that particular movie was a clever post modern parody of the type of movie that made him famous in the first place, and kick-started a franchise to rival the Elm Street series.

Posted by Gary Dobbs/Jack Martin at 10:42

May he rest in peace.