Don't Panic - Dad's Army are back

It remains one of the best loved and most iconic British sit-coms in television histoy, and next February will see the release of a new movie based on the mis-adventures of the Walmington on Sea Home Guard.

In 2004, Dad's Army was voted fourth in a BBC poll to find Britain's Best Sitcom. It had been placed 13th in a list of the 100 Greatest British Television Programmes drawn up by the British Film Institute in 2000 and voted for by industry professionals.The series has influenced popular culture in the United Kingdom, with the series' catchphrases and characters being well known. It highlighted a forgotten aspect of defence during the Second World War. The Radio Times magazine listed Captain Mainwaring's "You stupid boy!" among the 25 greatest put-downs on TV

The television series lasted nine series and was broadcast over nine years, with 80 episodes in total, including three Christmas specials and an hour-long special. At its peak, the programme regularly gained audiences of 18.5 million. There were also four short specials broadcast as part of Christmas Night with the Stars in 1968, 1969, 1970 and 1972.

The series was also made into a big screen movie in 1971. The film was popular enough for a sequel called Dad's Army and the Secret U Boat Base to be put into pre-production, but this eventually fell by the wayside and didn't get past the script stage. 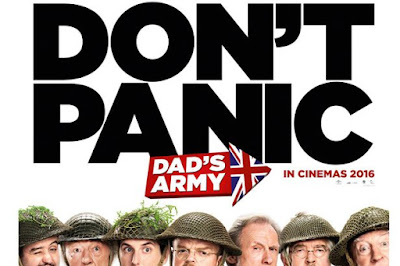 The new movie version is directed by Oliver Parker and hopes are high for a classic movie - the casting is spot on as can be seen in the photographs of the original and new cast shown above.

The first trailer also looks very promising and I'm really looking forward to this one.

I'll have to catch that one.