The photograph left, taken in 19 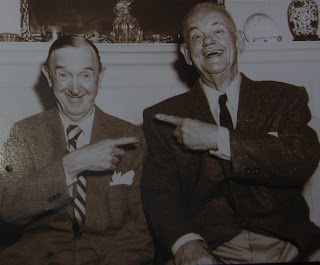 56 is the last publicity shot ever taken of Laurel and Hardy; arguably the greatest comedy team the world has ever known. Oliver had been suffering from ill health for some time and a forced diet had seen him shed 150ibs, which was the equivalent of Stan's weight.

The picture evokes mixed emotions - on one hand it's great to see the guys together, firm friends in old age. But on the other hand it is sad to see the team, ever youthful on celluloid, bitten by the ravages of age.

Oliver Hardy died a year later in 1957 and Stan would finally leave this world in 1965. And although the due were finally separated by death they will always be remembered in life as the greatest comedy duo the world has ever seen. 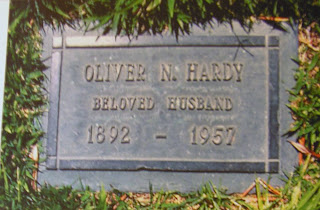 I love these guys and no matter how often I see their films I'm still reduced to tears of laughter - there's something these guys had that no other duo before or since have been able to replicate.

They are favourites with generations of comedians - there's a story Ernie Wise tells of his partner Eric Morcambe not liking the thought of them being in bed together for their comedy sketches. He refused to do it until someone pointed out that Laurel and Hardy often appeared in bed together. After that Eric was more than willing to go along and Morcambe and Wise went on to become Britain's all time most successful and well loved comedy acts.

Back to Stan and Ollie though - they were different, neither of them played the straight man and although it is Stan who is mostly seen as the clown of the duo, it must be remembered that Ollie could do a lot of clowning himself. Their comedy was mostly slapstick but this often hid the subtle cleverness of the team. And even now in the age of digital magic, Laurel and Hardy are still as entertaining as they ever were.

The world is still laughing

God Bless you both.
Posted by Gary Dobbs/Jack Martin at 10:44

Email ThisBlogThis!Share to TwitterShare to FacebookShare to Pinterest
Labels: laurel and hardy

A great comedy team. I haven't seen any re-runs for a while.

Still funny after all these years - always thought they were great