Rise of the Krays Review 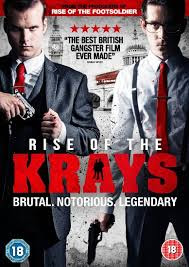 It's quite a remarkable performance by Simon Cotton as Ronnie Kray that drives this movie, while Reggie Kray, played by Kevin Leslie, doesn't get the same screen time or memorable scenes. Of course the Krays movie everyone is waiting for is Legend in which Tom Hardy play both twins but if this low budget, straight to DVD effort has one thing going for it - it is the fact that it shows the Krays as they must have truly been. There is nothing glamorous about them, they are a nasty, truly evil pair of bastards.

The quote on the DVD, comes from the Sunday Sport Newspaper and tells us this is the best British gangster movie ever made - it's certainly not that. Mind you the fact that one of the movie's financial backers was David Sullivan who these days is the largest shareholder in West Ham Football Club and until 2007 was the owner of both the Daily and Sunday Sport newspapers might have something to do with the newspaper's accolade. So maybe the film critic of the Sunday Sport was lent on and made an offer he couldn't refuse. Just maybe he feared waking up in the morning with a horse's head instead of a sexy strumpet beside him.

Still it's not a bad movie, just not a really good one  and could pass the time nicely if you want a gangland fix before the release of Legend next month. 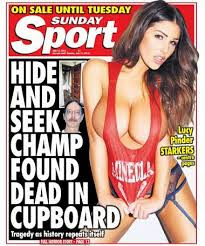 The Sunday Sport - covers and invents the stories the others won't touch...loads of tits too.
Posted by Gary Dobbs/Jack Martin at 17:49

Email ThisBlogThis!Share to TwitterShare to FacebookShare to Pinterest
Labels: movie reviews, rise of the krays