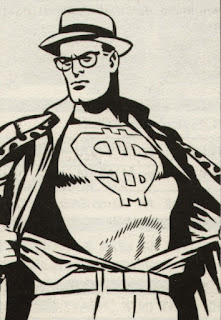 When Joe Shuster and Jerry Siegel created Superman way back in 1938, the naive young men did not consider the fact that their creation would be taken, though stolen may be more apropos,  away from them - how could they? At the time of Superman's creation there was no superhero industry and their creation, that champion of the underdog, defender of the people, would largely be responsible for setting off a bandwagon that continues to roll, maybe faster then ever, today.  Without Superman there would have been no Batman and without those two costumed punchers there wouldn't even be a superhero genre as we know it.

Shuster and Siegel came of age during the Great Depression - as young men they were drawn to each other because of a shared interest in popular culture - they were geeks before the word had been coined. Siegel dreamed up the character that would develop into Superman in 1934. He described the character to his friend, Joe Shuster who immediately started to sketch the character based on his friend's description.

The pair put an initial strip together, as pictured left, but their character, then called The Superman was rejected by every publisher the pair approached. It is interesting to note that two years before Siegel came up with the idea of his invincible crime fighter, his father was killed during a robbery.


On June 2, 1932, Jerry Siegel's father Mitchell, a Jewish immigrant from Lithuania, died during a night-time robbery at his Cleveland second hand clothes store.
The 60-year-old died during the robbery. It is quite possible that this tragic event would lead to Siegel creating a bullet-proof crime fighter.

Initially Superman's origins were vague but as the two men continued to shop their creation around to uninterested publishers, they added to Superman's mythos - naming him Clark Kent and explaining his powers as due to the fact that he was an alien from another planet. It is interesting to note that much of Superman's origin as known today was not invented by Siegel but by Batman co-creator, Bill Finger who wrote up the origin story after Siegel had been kicked off the strip by Detective Comics.


In 1935 Shuster and Siegel started selling strips to National Allied Publications, but they were unable to sell the Superman concept to the publisher. The idea was considered too ridiculous and publishers couldn't see how the character would fit into their comic books which were largely occupied by westerns and detective stories. However when the pair submitted Superman to newspapers with the hope that the character could become a syndicated strip, they were told to show the stories to Detective Comics

'I submitted 'Superman' to Detective Comics, together with other proposed comics. In early December (1937) , I visited Detective Comics, Inc. in New York and was invited to submit strips to be considered for their proposed new comic book, Action Comics. Soon after, I submitted 5 strips for consideration. Vin Sullivan, editor of Detective Comics, Inc., wrote to me on January 10, 1938: "I have on hand now several features you sent.... The one feature I liked best, and the one that seems to fit into the proposed schedule, is that 'Superman'. Joe Shuster 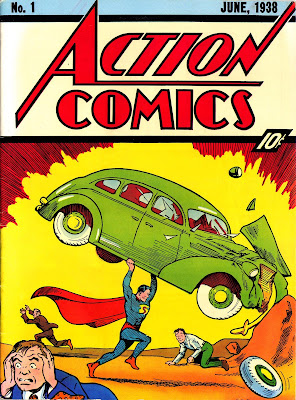 Shuster and Siegel were delighted in the interest in their character and after a meeting with Vin Sullivan they sold their strip to Detective Comics  Inc for $130 - the deal meant that  all rights in the character. This was one of the most audacious deals since Peter Minuit convinced the Indians to sell Manhattan Island for $24.

However unfair the deal was Shuster and Siegel were certainly aware of that they were giving up the rights to their creation. The original contract they signed read,

'I, the undersigned, am an artist or author and have performed work for strip entitled SUPERMAN
In consideration of $130.00 agreed to be paid me by you, I hereby sell and transfer such work and strip, all good will attached thereto and exclusive right to the use of the characters and story, continuity and title of strip contained therein, to you and your assigns to have and hold forever and to be your exclusive property and I agree not to employ said characters by their names contained therein or under any other names at any time hereafter to any other person firm or corporation, or permit the use thereof by said other parties without obtaining your written consent therefor. The intent hereof is to give you exclusive right to use and acknowledge that you own said characters or story and the use thereof, exclusively. I have received the above sum of money.
Sgd. Joe Shuster
Sgd. Jerome Siegel
Returned by mail on March 3, 1938'
The character made his debut in the first issue of Action Comics - Superman was shown on the cover, dressed in a figure hugging blue suit with a flowing red cape. He was lifting a green car up over his head, while a terrified, bug eyed witness flees directly into the foreground of the frame. In the background another man can be seen running away from this strange man who can lift an entire car not only off the ground but up above his head.

The character was an immediate success - as the lead feature, 13 pages per episode, he became a hit with young readers, and just a year after his debut the character was given his own title in which his story took up the entire issue, all 64 pages. This was a first for comic books at a time which when the accepted format was for anthologies featuring several different characters. Superman, issue one sold incredibly well and the character soon became a household name across America.

In 1947 Siegel and Shuster sued Detective Comics Inc for the rights  Superman and a "just share" of all profits that the publisher and its partners made from the character. The suit was filed with the Supreme Court of the State of New York, in Westchester County.

Again in 1969, Siegel and Shuster sued Detective Comics Inc in United States District Court for the Southern District of New York over ownership of Superman, based on the Copyright Act of 1909, which allowed the creator of the work to apply for copyright renewal after 28 years.
The court found that in the 1947 final consent judgment, Siegel and Shuster had transferred "all their rights" to the Superman character to National (Detective Comics parent company) , including the renewal term. This decision was based on the legal precedent set by Fred Fisher Music Co. v. M. Witmark & Sons, in which the US Supreme Court ruled that an author could in writing convey his renewal rights in advance of their vesting.

The court also ruled that Superman was a work made for hire, despite the fact that Siegel and Shuster had been developing the character long before they began employment at National. The court argued that  National had rejected Siegel and Shuster's earlier prototype of Superman and that the revised version that appeared in Action Comics #1 was made under the supervision of Detective Comics.


Siegel and Shuster were dismayed but they would not give up their battle to regain the rights to their creation - by this period the character was being worked on by other writers, and Siegel and Shuster had even lost their creator credits from the Superman comic strips. And In 1975, Warner Bros. announced the production of a Superman movie to be directed by Richard Donner. Siegel publicly condemned the project and drew attention to his mistreatment by DC Comics. 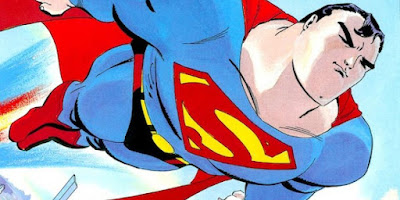 Siegel wrote in a press release -


'I curse this movie.Why am I putting this curse on a movie based on my creation of Superman?
Because cartoonist Joe Shuster and I, who co-originated Superman together, will not get one cent from the Superman super-movie deal.

Superman has been a huge money-maker for 37 years. During most of those years, Joe Shuster and I, who originated the character Superman, got nothing from our creation, and through many of those years we have known want, while Superman'S publishers became multimillionaires.


As far as Joe and I are concerned, we have been victimized by evil men and a selfish, evil company which callously ruined us and appears to be willing to abandon us in our old age, though our creation Superman has made and continues to make millions for them. Newspaper articles state National was paid $3,000,000 for the rights to make the Superman movie and that $15,000,000 will be spent to produce the movie. And the originators of Superman, Jerry Siegel and Joe Shuster, are not to receive one cent.

WHAT AN INFERNAL, SICKENING SUPER-STENCH EMANATES FROM NATIONAL PERIODICAL PUBLICATIONS, INC. We hope the public will never forget this when seeing the Superman character, or National Periodical comic books. Do not patronize Superman because of this injustice.' 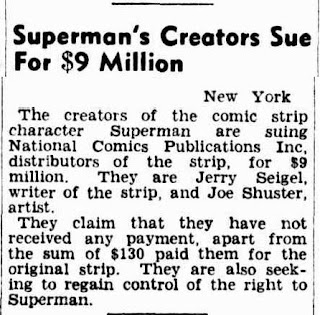 Siegel found sympathizers such as Neal Adams and Jerry Robinson, who waged a public relations campaign for better treatment of comic creators in general. In order to avoid bad press, Warner Bros. agreed to give Siegel and Shuster a yearly stipend, medical benefits, and credit their names in all future Superman stories, in exchange for no longer contesting ownership of Superman.The stipend was initially $20,000 but rose over the years.

Shuster died in 1992 never having received his fair share of the Superman bonanza. DC Comics offered Shuster's heirs a stipend in exchange for never challenging ownership of Superman, which they accepted for some years. And when Siegel died in 1996 it seemed as if the legal battles regarding Superman were over once and for all.

This was not to be the case and the heirs of Siegel and Shuster have several times made legal claims against both DC Comics and the Warner studios who now own the rights to the character. The copyright to Superman was in its renewal term on October 27, 1998, the date the Copyright Term Extension Act became effective, which means it will expire 95 years after it was first secured. Therefore, Superman is due to enter the public domain in 2033 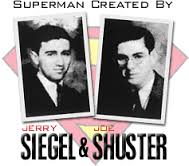 Warner Bros is finally free of the last copyright Kryptonite plaguing its ownership of Superman. The 9th Circuit Court of Appeals today handed the studio another legal win in its battle with the estates of the Man of Steel’s co-creators Jerry Siegel and Joe Shuster – and the court did it with some degree of humor. “In this appeal, we address another chapter in the long-running saga regarding the ownership of copyrights in Superman... FROM DEADLINE

Posted by Gary Dobbs/Jack Martin at 18:51

Thanks for the rundown on Superman. I found it really interesting.

Glad you liked it

i like this interesting comics which is nice and very much interesting thanks for providing information.

A nice article here, i think that people who have grown up with the idea of using computers are showing more responsibility towards writing posts that are thoughtful, do not have grammar mistakes and pertinent to the post..