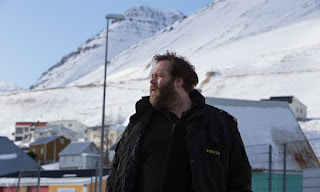 I've just binge watched another slice of Nordic Noir - ten episodes consumed over five days makes for an intense experience. This time out it is Trapped, an Icelandic drama, that has all the dark chilly beauty of shows like The Killing, but adds a claustrophobic kick ass blow

Andri (Óladfur Darri Ólaffson), a hulking bear of  a man,  is the police chief of Seyðisfjörður - a bleak little place at the end of a fjord in the east of Iceland. In winter, it’s dark, it's freezing and the aftershocks of the 2008 financial crisis are still being felt. If that wasn't enough darkness Andri also has to contend with his marriage falling apart before his eyes - his wife returns to town with her new boyfriend and just when it couldn't possibly get any more miserable for Andri the killings start and are then followed by a storm which cuts Seyðisfjörður off from the rest of the world.

Directed by Baltasar Kormákur, who shot the Hollywood thriller Everest, the camera lingers on thick grey seas, horizontal snow and huddled houses, which creates a real feel for the remoteness of the setting. The plot is clever and expertly served up across the ten episodes so that when the final twists are served the viewer is left exhilarated. A action packed final ten minutes are the perfect ending to what is another compelling piece of crime drama from the Nordic genre-masters.

I'm hooked on Scandi dramas and over recent months have binge watched The Killing, The Bridge, Borgen and now my latest obsession, Trapped. It is clear that the Danes and Swedes have much to teach about TV craft. The Killing took 20 episodes to solve one murder – a series length, and slow rate of progress, that would have been unthinkable for a UK production. Both Borgen and The Bridge are visually stunning, with as much attention paid to the production design as to the plot, and the actors who fill the roles in these series are believable and seem real - we don't so much  see the actors, but the characters they create for us. And even when the plot is barking mad, as is the case with The Bridge, there is a level of realism that gives the shows an air of authenticity.


That's not to say we Brits can't do grit when we want to - Happy Valley, Broadchurch and The Fall are three homegrown shows that are as good as the Nordic dramas, but would any of these have followed the blueprint for grimy realism had not The Killing been such a hit worldwide? I think not for The Killing showed that a serialised narrative, when done right, could keep viewers gripped for an entire run. It allows for the characters to be slowly shaped across a large canvas and quite simply is responsible for some absolutely brilliant TV drama.

'The countries that the Nordic writers call home are prosperous and organized, a “soft society”  But the protection offered by a cradle-to-grave welfare system hides a dark underside.' Nowegian crime writer, Jo Nesbo.

There is an interesting article HERE that looks at the obsession with Nordic Noir
Posted by Gary Dobbs/Jack Martin at 04:06

Wonderful bloggers like yourself who would positively reply encouraged me to be more open and engaging in commenting.So know it's helpful.