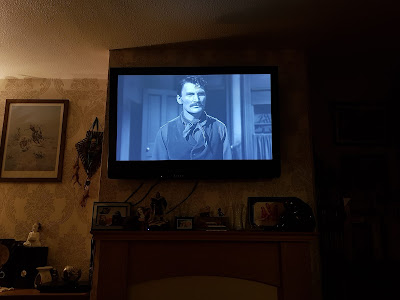 Early hours of the morning, and I'm lounging on the sofa, my pipe filled with a Virginia/Perique mixture, a glass filled with a creamy porter from Brains, and I'm just flicking through the TV channels, so many of them with nothing to watch when I stumbled on this western, which I don't think I've seen before, on Netflix.

It was odd seeing Jack Palance in a role such as this -  he was usually cast as the bad guy, playing the part in some memorable westerns including of course Shane, but here he's the leading man. Technically, he's a bad guy but he's determined to go leave his life as a gunslinger behind him at the outset of this movie and provide a life for his son, Riley (Anthony Perkins). 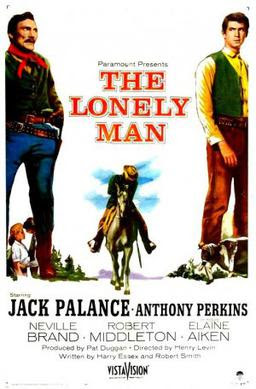 The plot is quite simple - Gunslinger, Jake Wade (Palance) rides into save his long abandoned son Riley (Anthony Perkins) and provide him with some kind of future after the death of the boy's mother. The son though hates his father, is totally fixated on his dead mother and acts like a petulant child - seems that even then Anthony Perkins had cornered the market on playing dead mother fixated young men. Though Perkins doesn't display this by dressing up as his late mother and running around with  a carving knife, but instead refuses to accept anything from his father. The pair end up torching the family home and moving out together - at the first town they try to settle in they are moved on because of Jake's gunslinger past, and so they go to the home of Ada (Elaine Aiken), a women who looks wonderful in a pair of blue jeans. The woman's in love with Jake but all he can think of is providing some kind of future for his son.

Jake: What do you do for a living?
Riley: Nothing...I get along.


Soon the ;past catches up with Jake, in the shape of enemies from the past and it is revealed that Jake is going blind - what good's a blind gunfighter? 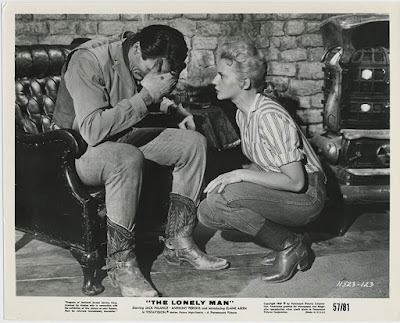 I'm surprised this movie is not better known - I pretty much have a good knowledge of western movies, and I can't say I'd ever heard of this one. It doesn't follow the standard structure of such movies, and the performances are quite excellent. It was also filmed in Vistavision which gives a clarity to the black and white images, unusual in itself since most Vistavision pictures were filmed in colour. The scenes in which Palance and his small band try and round up the wild horses are breathtakingly filmed, and look quite beautiful, and the inevitable final showdown is brilliantly staged. The female lead played by Elaine Aiken in her debut performance, and I don't think I've ever seen a woman fill a pair of jeans so well, but incredibly she didn't go onto have much of an acting career though did become one of the leading acting teachers at the Strasberg Theatre Institute. She is brilliant here and pulls of the part of a women torn between father and son with gusto.


You can't beat a good western - I've always said that, it's my favourite genre, And I really enjoyed this movie. Tonally, I found it not dissimilar to the Anthony Mann westerns of the same period and Palance and Perkins are both excellent, as are the rest of the cast.

Posted by Gary Dobbs/Jack Martin at 06:16