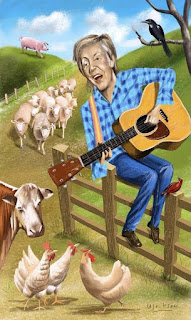 Let's talk Paul McCartney's new album, McCartney III - The previous two self titled albums were released at times when the artist found himself at crossroads in his career - McCartney came in 1970 just as the Beatles were falling apart, and McCartney II arrived ten years later just as Wings were about to be grounded.

'Well I can find my way, I know my left from right.'

This time out circumstances are somewhat different, though like the previous two McCartney albums this was recorded during a time of great  upheaval. Macca had planned on spending 2020 touring the globe but the pandemic found him confined to barracks and so given his workaholic condition and the fact that he has a  state of the art recording studio at his Sussex home he wrote a bunch of new songs, completed some old ones and here we have it, McCartney III. For Macca lockdown became rockdown.

'Chasing the morrow, getting ready to run'

It's a damn fine album too, that mostly sticks to the concept of the previous two McCartney albums with the artists doing almost everything himself - playing all the instruments, supplying the vocals, both lead and harmony and producing, mixing and even making the coffee. The album also follows the same pattern as the other McCartney albums with several instrumental pieces, a smattering of strange little ditties and the odd masterpiece thrown in. 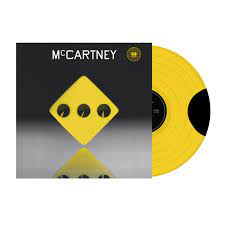 Beatle fandom is a strange thing and there are some people who will knock this album - they tend to criticize McCartney because his voice is not as powerful as it once was, but that's bullshit and if you follow that lead them you may as well knock Macca for having more wrinkles than Beatle Paul or for having greyer hair than the Wings frontman.

I'm comfortable with senior Macca and no matter what his detractors say he has remained consistent since those early days on Merseyside. He's still capable of turning out the most saccharine of tunes as well as pulling off something so left-field that he leaves the young turks standing. He's also not averse to singing about fixing fences to protect the chickens. Years ago he was fixing a hole to stop his mind from wandering and now he's ruminating about fixing the fence by the acre patch. All he wants, you know, is a home in the heart of the country.

'Dinosuars and Santa Claus will stay in tonight.'

McCartney seems to be chasing the strangest ideas throughout the album and coming up with some incredibly original tunes which contains that melodic gold that he's known for. Perhaps the strongest track is , Deep Deep Feeling which is astounding in the way vocal layers are built over a minimalist beat. I love that one

The Kiss of Venus

And so McCartney's late career golden patch continues to shine bright and McCartney III continues a run of great albums that truly reward the listener with repeat spins. For now, I'm off to find the sun when winter comes.

Posted by Gary Dobbs/Jack Martin at 00:32