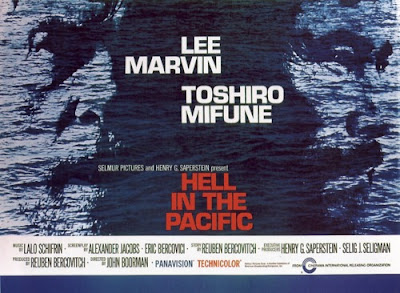 From the title you'd think it was an all action war epic, and when I slipped the DVD into the player that's just what I was expecting. It had Lee Marvin in it, it was a war film and I was expecting something along the lines of the Dirty Dozen.

I had a vague memory of this film...or at least I thought I had but it turned out that I'd never seen it before and was confusing it with something else.

I didn't get my explosions and brilliant battle scenes, but instead something I really wasn't expecting. I don't think I've ever seen a war film quite like this - though perhaps in the accepted sense it isn't a war movie at all, but rather a film set during World War II that explores two very different men, from totally different cultures,  and the relationship they are forced to assume. 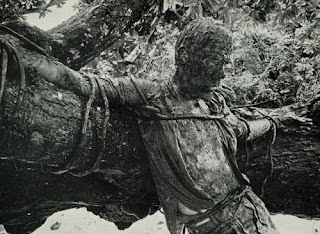 The film opens with an American pilot and a marooned Japanese navy captain deserted on a small uninhabited island in the Pacific Ocean, and in order to survive and maybe escape  they must cease their hostility and  work together. Toshiro Mifune's dialogue is spoken in his native Japanease and we are not given subtitles, having to gather the gist of what he his saying from his actions. This is a neat touch and puts us in the same position as Lee Marvin's character as he tries to figure out what is going on with the other man. Initially the two men are at odds and each time one or the other finds something or creates something useful, the other tries to steal it. They fight at times but neither of them seems quite ready to kill the other. Eventually they see their animosity as useless and combine forces to build a raft and escape the island upon which they are marooned. 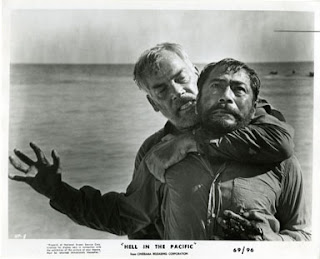 At different points in the film each man is captured and bound by the other, but they both realize that they will have a better chance of survival if they work together.That the characters don't speak the same language means that the storytelling is carried forward visually and the two actors, the only two in the entire movie, provide powerhouse performances.

At the end though this is not a story of survival but rather about overcoming prejudice towards  a sworn enemy in a time of war.


I liked everything about this film and although it only had the two characters and the one location it didn't drag at all and I found my eyes glued to the screen. I enjoyed this film very much and liked the sudden ending, which whilst a little predictable stayed true to the feel of the movie.

Email ThisBlogThis!Share to TwitterShare to FacebookShare to Pinterest
Labels: hell if the pacific

I have seen this one, more than once-good film.

Only seen this twice - once in the cinema. I went with a bunch of mates - they left and I stayed because it was too involving. The other time on TV and so I bought the dvd.