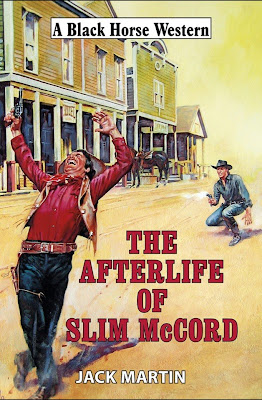 My new western The Afterlife of Slim McCord is currently sitting at number one in the bestselling Black Horse titles on Amazon, and that's on pre-orders alone. The book won't be published until this November and readers wanting to ensure a hardcover on publication day should head over to Amazon and pre-order the book now.

1 - The Afterlife of Slim McCord by Jack Martin
2 - The Hughwayman by Owen G. Irons
3- The Commanche Fights Back by D. M. Harrison
4-A Rope for Iron Eyes by Rory Black
5- She Wore a Badge by Steve Hayes

Ageing not so bad men Blackman and Tanner thought they had seen it all, but nothing could have prepared them for what they would find in the town of Possum Creek.

Once they had ridden with the notorious outlaw Slim McCord and when they came upon his mummified remains in a travelling carny show, they find themselves thrown into an unlikely and dangerous series of events as they, together with their dead leader, head towards a destiny that seems preordained.

Slim McCord, long after his death, is now involved in the most lucrative bank robbery of his outlaw career, as the three men, together again, face all manner of danger and find that, as the bullets fly, it’s just like old times.
Posted by Gary Dobbs/Jack Martin at 02:14

Email ThisBlogThis!Share to TwitterShare to FacebookShare to Pinterest
Labels: jack martin, the afterlife of slim mccord