"Hell No! it would involve riding a horse, have you seen those things? they're ugly at both ends & darn uncomfortable in the middle"   J. T. Edson upon being asked if he'd like to be a real cowboy.

He was once one of the world's best know western authors, perhaps coming only second in name recognition, if not in sales,  to Louis L Lamour, and yet these days he is virtually forgotten - so much so that recently there was a debate on Facebook amongst a number of western addicted friends about the author. Strangely most thought he had died and there was little to confirm otherwise on the internet. I put on my investigating hat and discovered that J. T. Edson was indeed alive and residing in an old people's home just outside Melton Mowbury. In later years the author had become a recluse due to ill health and was no longer writing - mystery solved, then. However the story took a twist and  it was shortly afterwards that we heard the author had died at the age of 86.

He had been responsible for more than 130 westerns and although an Englishman, who most recently lived in Melton Mowbury he was an honorary deputy of Travis County, Texas - something that came about because of his once huge popularity in the US.

Edson had been  a dog handler in the British Army - he served in Kenya.  Like many writers he worked many jobs before finding success -  running a fish and chip shop and working the production line  in a pet food factory were only two of the jobs he did before finding success as a writer which enabled him to concentrate on his craft full time. Overall he was responsible for paperback sales totalling more than 20 million. Once he had been a household name but the western fiction boom is now long over and he remains unknown to all but western aficionados.

"My father did  inherit a love of good quality, 'genuine cowhide' leather belts & cowboy boots, I must stress, no cowboy would stroll out, guns at dawn in one of his many very loud Hawaian shirts!" Sam Page, daughter of J. T. Edson. 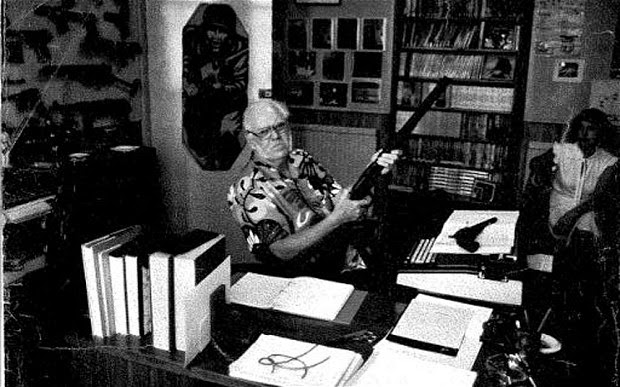 Edson's style was for straight forward storytelling, fast paced and action packed though he was fond of historical detail and many of his books contained footnotes that were often more than a page in length. These could on times be tiresome and many readers skipped them, but when they worked they added a level of authenticity to the story. Often these footnotes would concern issues of continuity from book to book, but on times they would contain vital historical detail - I learned a lot about the real Old West from J T's footnotes.

The author often made in-jokes within his books and in 1984 the Labour Party protested about the characters in JT’s Ladies: they included a gunslinger called Roy Hattersley (then the party’s deputy leader) and his sidekick Len Murray and three desperadoes named Alex Kitson, Alan Fisher and David Basnett — all of them well-known trade union leaders.J T then, was not a lover of trade unions. Edson developed a deep disapproval of Liberal and Liberal-Radical politics and was avowedly Right of Centre in his political ideology.

Edson was also no fan of his critics and a dedication in one of his books (J. T' Ladies) read: " For all the idiots of the press who have written articles entitled things like 'Fastest Pen in Melton Mowbray’ and have been filled with the most stupid, snob-oriented pseud-jargon never to appear on the pages of mine or any other author’s books. May the bluebird of happiness fly over them when it has dysentery, because that is catching.’’ 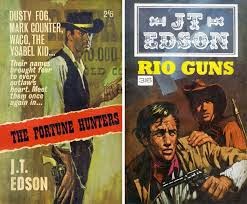 The books of course live on and are still out there - Edson titles are pretty common on the used book circuit, and hopefully the books will soon find a new lease of life in the digital marketplace.

Fads in reading come and go and although westerns are not currently the most popular genre for escapist fiction, they will no doubt have their day again. And when they do then J. T. Edson will again be riding high ....you can't, after all, keep a good man down.

Posted by Gary Dobbs/Jack Martin at 09:27

Ole jt was one of the reasons i remained a fan sn of the genre after i grew out of the hundreds of tv westerns of my youth. Great fast paced entertainment that also contained real emotional impact.
A real master of our field

Have read two or three of his novels, I say they were damn good and entertaining.