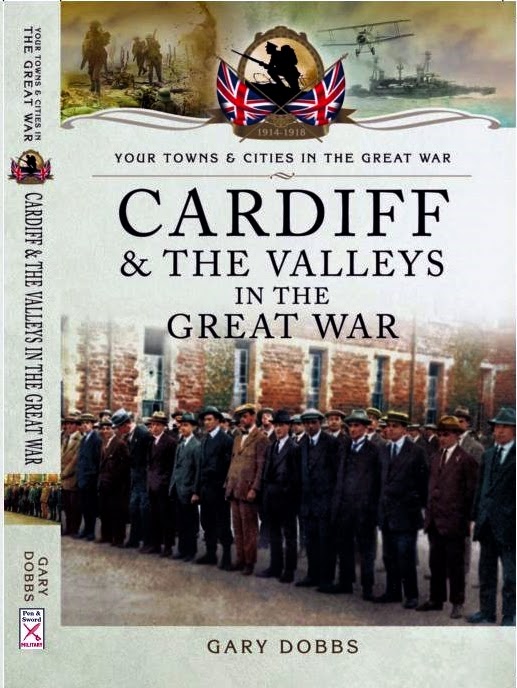 Watching filmed footage of the First World War one gets an odd sensation - we are aware that what we are witnessing are horrific events, and yet there is so much distance between now and then that it is difficult to fully appreciate the enormity of the situation presented in the grainy film. The movements of the men on the screen seems jerky, almost as if they were created by animation and the explosions are merely puffs of smoke, fleeting and seemingly insubstantial. Photography is basically the capture of light and what we are watching is sunlight a hundred years dead.

Prior to starting work on my book, Cardiff and the Valley's In The Great War (published Feb 28th 2015 by Pen and Sword Books), my knowledge of the so called Great War was limited to a list of dates and major battles. But by the time I finished the book I had a far greater understanding of the conflict. It had been brought closer to me, and now I saw it as a very human story. No longer was it some far distant war, the combatants made up of anonymous names and faces, the devastation lessened by the passing of the years, but something very real, something that I felt on a deeply emotional level. There were times when I was writing that I found tears in my eyes - one such instance was when I detailed the eventual fate of the Cardiff Pals, but there were others too. Writing the book had brought me closer to these soldiers who long before I was born took to the foreign fields to protect a way of life for future generations...for you and me, if you like.

The research for the book was immense and I spent many hours going through old newspapers in Cardiff's excellent Central Library, covered many miles traveling up and down the country visiting graveyards and the offices of military records and on several occasions meeting people who had stories to tell of relatives who had fought in the war.

I am immensely proud of this book and now have to work with the publishers on the proofing stages, before the book is ready for the printers. It's due out on Feb 28th 2015 and is already showing up on Amazon where you can request to be informed when the book is available for purchase.

I do hope many of you pick up a copy.

Cardiff in The Great War - Looks at the Cardiff Pals and other local regiments who fought in the Great War and how the experience of war impacted on the area, from the initial enthusiasm for sorting out the German Kaiser in time for Christmas 1914, to the gradual realization of the enormity of human sacrifice the families of Cardiff were committed to as the war stretched out over the next four years. An important place for Coal export this book looks at how the balance between working and fighting was achieved by the Dockyard workers The Great War affected everyone. At home there were wounded soldiers in military hospitals, refugees from Belgium and later on German prisoners of war. There were food and fuel shortages and disruption to schooling. The role of women changed dramatically and they undertook a variety of work undreamed of in peacetime. Meanwhile, men serving in the armed forces were scattered far and wide. Extracts from contemporary letters reveal their heroism and give insights into what it was like under battle conditions.
Posted by Gary Dobbs/Jack Martin at 01:57

Email ThisBlogThis!Share to TwitterShare to FacebookShare to Pinterest
Labels: cardiff and the valleys in the great war, gary dobbs, the great war

A lot of work there. Good luck on the sales.