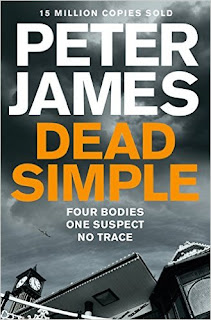 Dead Simple (2005) is the first in the hugely popular DS Roy Grace series from Peter James - when I picked up this book earlier this week I was coming to the series fresh. I had read Peter James before, I even interviewed the author for Samhain Magazine but that was back in the day when the author was known for his horror/supernatural novels.

Dead Simple then is the author's first crime novel though he doesn't leave his supernatural roots behind entirely, and there is some malarkey in this novel involving a psychic who Roy Grace consults in order to locate dead bodies, missing persons and his car keys. His acceptance in the supernatural often gets him into trouble with his superiors, the judiciary and the media. To be brutally honest I did find this element of the story to be slightly ridiculous but that's a small gripe given how genuinely gripping this book is.

Dead Simple which has been adapted into a stage play, and is being mooted for possible TV adaptation, is structured more like a thriller than a standard crime novel. It doesn't take the whodunnit route since the reader is drip fed information throughout the story and is always one step ahead of the police. Though the author  manages at several key moments to twist the story in ways totally unexpected, which leaves the reader squirming in glorious anticipation of what happens next.

The plot goes: A  stag night prank of burying the groom in a coffin by his mates. If this seems a pretty extreme prank, (I mean what's wrong with stripping the groom naked and tying him to a lamppost in the town centre? Or shaving his bollocks and tattooing a smiley face on his manhood?) then it all makes sense when James explains the history that leads to this event. The macabre prank becomes plausible enough to stick with it.  However the first of many twists comes when  the perpetrators are killed in an horrific traffic accident  - this leaves our man trapped in the coffin. We soon learn that one person knows of the coffin prank but it seems he has a lot to gain by leaving the man there.  This is where the twists start but the plot does remain credible within the confines of the world here. And speaking of confines, some of the coffin scenes really are genuinely claustrophobic to read.

It's a page turner, folks and although it often strays dangerously close to B-movie shenanigans it does manage to keep itself on track for an excellent climax. If there was a problem with the story it was the author's decision to suddenly pull a key character out of nowhere towards the end of the book- a character who largely drives the book towards the breathtaking climax involving a car chase that could put Bullitt (a movie actually referenced by a film buff cop in the plot) to shame. The author is a skilled storyteller and skills learned when he was a scriptwriter serves him well in keeping the incredibly impressive pace of the narrative.

The book did leave some questions hanging for me - Why don't the police ever check emails? At least five  of the characters would have sent or received emails containing the exact details of where the coffin was. Why don't the police make any real effort to work out where the coffin could be? Such as, maybe, an empty plot of land owned by the main characters, a plot of land that's right by one of the pubs they went to. These questions were racing through my mind but the plotting is so incredibly well done, the pacing so exciting, that the story hooked me entirely and I couldn't put the damn book down.

Of course a crime series such as this is largely dependent on creating an interesting main character - for it is this character who will carry the series from one book to another. So what of Roy Grace? Well Peter James gives as a cop who is not as dour as John Rebus, nor as earthy as Tom Thorne. There is a sadness surrounding Roy Grace, who comes across as a likeable and ordinary man who finds himself in extraordinary situations. The reader learns that his wife went missing some years back, no one knows what has happened to her and no doubt this element of Roy Grace's past will become important as the series progresses. The disappearance of his wife (their marriage is portrayed as having been idyllic) haunts the policeman and is largely responsible for his penchant to turn to psychics in order to help in solving crimes

I will be reading more in this series - in fact I'm going to start the second book,  Looking Good Dead, today - I will be interested in seeing where the character goes and if psychic malarkey continues throughout the series.

All in all Dead Simple was an excellent, tighly plotted crime thriller....I bloody enjoyed that. Dead good, it was.