The Fall: Three Seasons and why Jamie Dornan should be the next James Bond 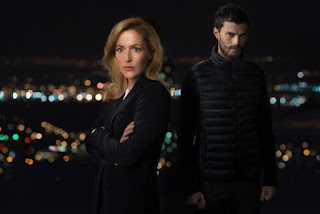 I've just binged on all three seasons of Allan Cubitt's darker than dark masterpiece, The Fall. Seventeen episodes, played out over three seasons, delivered one of the screen's most terrifying and believable serial killers - In comparison to killer Paul Spector, played by Jamie Dornan, other screen psychopaths just don't cut it. Hannibal Lecter seems a character from a fairy tale when put alongside the nuanced killer who dominated the screen in this multiple award winning TV series.

And it is the character of Paul Spector that drives this series - writer and creator, Allan Cubitt has created a fully rounded character - a man who is evil personified and yet at the same time one of the most likeable and charismatic fictional creations in all of TV-world. This is quite an achievement, both in the writing and the execution - Spector is humanised because  the viewer often sees him through the eyes of other characters - we feel his daughter's unconditional love for a man who is the most important thing in her world, and like her we struggle to understand how a man such as this could be responsible for a string of truly horrendous killings. Likewise we look on the man through the fixated eyes of Katie Benedetto, the teenage babysitter but most often we see him through the eyes of  Detective Stella Gibson, played by Gillian Anderson in a career best performance. 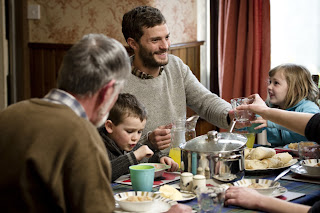 Other shows are ambiguous with their serial killers - referring to them as monsters and setting them apart from the rest of us. Sure they can often interact with us but there is always something 0FF with them; they are different to the rest of us. This is not so with Paul Spector - he is so ON that it is terrifying - we seen him interacting with friends and family, laughing, crying. We see him lovingly cuddling his daughter in a park while simultaneously stalking his next victim. He is an animal in human form, a feline presence. For the most part he is a caring human being, a credit to his community but beneath all this there dwells a darkness as black as the deepest of coal mines.

Spector is played by Jamie Dornan, currently making mega money in the Fifty Shades movies, and he gives a performance that positively screams, 'you are looking at the next James Bond.' He is athletic, brutal and can play both light and dark with equal conviction. He's got real acting chops too - witness the facial ticks just before he explodes into shockingly impressive violence in his final episode. He also looks impressive in a tux. 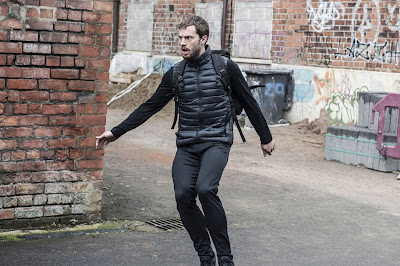 I digress though and although the role of 007 could fit the actor well, the character wouldn't provide him with as much to get his teeth into as he is given in all seventeen episodes of The Fall. The makers of the show claim that The Fall will continue, but given that the character of Paul Spector is the reason for the shows success it is doubtful that future series would be able to match the masterpiece that are the three seasons made thus far.

The Fall is not a mystery, we know who the killer is from the start, and the show takes us into the very heart of darkness itself. We are repulsed by the character of Paul Spector but at the same time we empathise with him, and we come to realise that he is as much a victim as the poor women who fell prey to his perverted sexual desires. Though in truth desires is perhaps the wrong word for what drives Spector to kill - compulsions maybe closer to the mark. It is especially disturbing that once he has killed he then treats his victims with great love and care - bathing them, dressing them, posing them. He touches them with true tenderness, all the while the expressions on the actor's face taking the viewer far too close to the madness at the heart of his blackened soul. True enough it is a soul without redemption but at the same time we ultimately come to realise that the true monster is not Paul Spector, but actually Father Peter Jensen, a paedophile who abused scores of boys, Spector included, when he was in charge of a care home.

The fact that Spector is so handsome is unsettling to the viewer.  His muscular allure belies the assumption that sexual predators act as they do because they’re ugly and stupid; that they attack women because women won’t give them a second glance. We expect murderers and perverts to be repulsive weirdos and not seemingly ordinary family men. Why would someone who looks like Spector behave like this? This aspect of the show gave the media much anguish and garnished a lot of criticism but think Ted Bundy - The Fall simply holds up a mirror to a dark truth in our society - not all monsters have hunched backs, 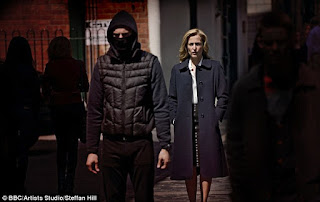 'The Fall doesn't challenge evil: it wallows in it. This series is an invitation to share the extended rape fantasy.' The Daily Mail

Over the three seasons we saw Spector planning and carrying out his crimes, we saw him arrested, hospitalised and then we sat uncomfortably in a room while he was assessed for mental competence to stand trial for his murders. The incredible finale in which Spector ultimately escaped justice by taking his own life was a hour of jaw dropping television. Mind you my jaw was scraping the floor for entire the three season run.