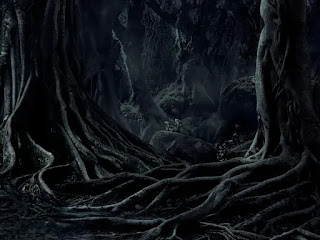 There was a time, more years ago than I care to mention, when I read nothing but horror novels. I knew who the King was and I devoured page after page of his rambling prose, I was in love with the works of James Herbert, fascinated and often sickened by the splatter-punks. I would squeeze in a short story from the Pan Books between novels and I explored the likes of Koontz, Barker, Laymon, Lumley and others.
I became personal friends with several dark scribes and even had one horror author (Steve Harris) come visit and stay several days while we drank whisky and talked genre history - a journey that took us from Stoker and Poe via Jackson, Lovecraft and down that dark winding road  to Stephen King and of course there was  a little Guy N. Smith thrown in for good measure.  Eclectic blood soaked days, indeed.

That was then though but these days apart from the odd Stephen King, and he's long broadened out from basic horror, I've not really explored the genre. So I'm not sure how I stumbled across The Ritual by Adam Nevill but I did, and all I can say is WOW! This is a brilliant read that showed me that not only was the genre alive and well but it remains as much fun as its always been. 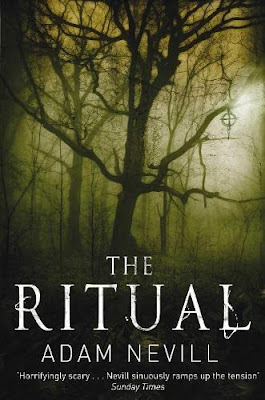 It was the plot of the book - several city slicker friends out of their depths in the Scandinavian wilderness - which appealed because I am a great fan of nordic noir, and that particular sub-genre often skirts around the borderline of what we would call horror fiction.Of course the fact that the author's gained much praise from critics, even being called the British Stephen King also intrigued me.

After a few pages I was hooked and picked up the book at every opportunity - it starts off by exploring the fractured relationships between the four lifelong friends, before they take a wrong turning and become lost in an ancient forest where they are stalked by some sort of creature that may be as old as time itself. Throw in Viking legends, a death metal combo. the old Gods and a group of hillbillies that seem to have been spawned from a mating between Deliverance and the Texas Chainsaw Massacre. Oh, and let's not forget that pitiful old woman who just may be the creepiest character in the entire book.

The author does an excellent job of creating atmosphere and the tension is handled so well that the pages just fly by, as the reader becomes engrossed in the well constructed and expertly handled story. Things do get gruesome in places but there is a lot of black humour that is positioned in such a way as to allow the reader to go with the more ridiculous sections of the narrative.

To sum up then this is a powerhouse of a horror novel - often terrific and never silly. That's quite an accomplishment.