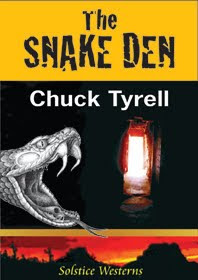 It's a shame this eBook is published a little late to have been part of Wild West eMonday but it'll be available by the end of the week and western fans, as well as those who like a good adventure drama will not want to miss it.

It's one of the first releases from Solstice Westerns and when I first saw this in manuscript form I read it in one long and delightful sitting. It's a compelling read that grabs the reader and refuses to let up. I know my westerns and I have no reservation in saying, this is the dog's bollocks!!

Expect to find the eBook at Solstice Westerns, on Amazon, Good Reads and all the usual stockists.

The Mexican Zapata wants to stick him with a knife, the warden wants him to mend his thieving ways, and the sergeant of the guard wants to get into Shawn’s pants. If he won’t do what Sergeant Tarkington wants, he’ll end up in the Snake Den, a cube of iron straps hung from the ceiling of a dark cave. If he doesn’t do what Zapata says, he’ll end up with a nail sticking out of his eye. If he can’t convince the warden that he’s not a thief, he’ll spend his days tromping Colorado River mud to make adobe bricks.
Is his young life going to be made up of beatings, rape, and incarceration in the deadly Snake Den? The odds seem stacked against young Shawn ever getting out of Yuma Prison alive.
The Mexicans hate the whites, the Chinamen and blacks stay out of the way, and the whites fight among themselves. Somehow, Shawn must learn how to defend himself, and chance throws him in with Shoo Lee, a cellmate, an Oriental proficient in the barehanded fighting technique Kara Ti. Perhaps if he becomes Shoo Lee’s disciple he can endure...
“Remarkable. A page turning thriller set in a frontier prison where a boy convict learns about the tough world of survival as he grows into a man. Told with gritty courage and honesty – a surprising blend of East and West, it’s a coming-of-age story like none you’ve ever read.” – Corinne Joy Brown, author of McGregor’s Lantern, Sanctuary Ranch, and Come and Get it!

“Though young, Shawn has the strong moral fiber to survive, no matter what comes his way. Chuck Tyrell has produced a memorable hero and a grim, gritty yet very real tale of brutality leavened with kindness, despair salved with hope, and ultimately an inspiring testament to a young boy’s journey into manhood.” – Ross Morton, author of The $300 Man

"Chuck Tyrell has brought authenticity and poignancy to a western with a difference..."
– Jack Martin, author of The Ballad of Delta Rose.
at January 04, 2011

Is this just an ebook or can it be purchased in normal book form?

Ray - initially it will only be available as an eBook but there will be a POD version somewhere down the line.