Antarctic Press, based in San Antonio, Texas, has published the "Steampunk Palin" comic, which features a vampy Palin holding a brass ray gun contraption with goggles perched on her bumpit and a canister on her back.

This sexed-up version of Palin is as buxom as the old-school Wonder Woman. In one scene she even sports a tongue ring. But it's her mission that counts, right? Like all superheroes, Palin finds herself faced with a massive world problem – an energy catastrophe in the immediate aftermath of a war that has destroyed all the Earth's oil. 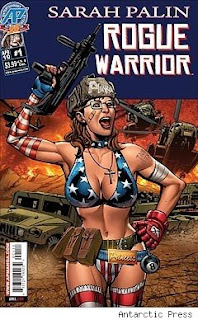 The promo copy for it says: "Massive oil spills, nuclear meltdowns and more leave us desperate for viable energy sources to rebuild global society and technology. Inspired by a little tea party, Sarah Palin hits upon the answer: steam power!"

Hence, her entry into the steampunk universe, which is in black and white to reflect the Victorian era. Palin, ever resourceful, creates the "Steam Initiative" to promote geothermal energy. She fights the bad guys of big oil and nuclear power. Not to be a spoiler – in case you want to add this to your Palin collection -- but the story also includes Palin in a coma, waking up six months later to find that 60 percent of her body has been replaced with steam technology.

In one frame, Palin says, "I can already feel the power this armor has coursing through me."

Sen. John McCain, with a robot arm, and President Barack Obama, now part-robot and re-named "Robama," also make an appearance. But Sarah saves the day, telling Obama, "Obama, don't even think of getting in my way."
Posted by Gary Dobbs/Jack Martin at 01:48

Email ThisBlogThis!Share to TwitterShare to FacebookShare to Pinterest
Labels: the cult of sarah palin