RADIO DAYS -LISTEN TO THE THE WILD WEST 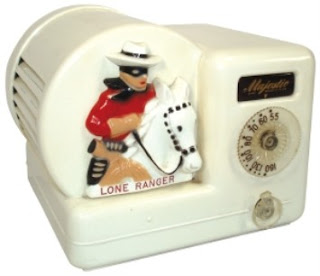 During it's heyday the western was never far from cinema and TV screens, but there was also another home for the western and that was the radio. Back in the day many hundreds, thousands even,  of western based episodes starring such genre luminaries as James Stewart, John Wayne and Alan Ladd were produced and sent out over the networks.

The westerns with its wide open landscapes and thrilling adventure was perfect for the imaginary words created by sound effects, good acting and the listeners imagination and there are thousands of old shows that can be listened to online - for instance there were 2,956 episodes of The Lone Ranger produced for radio and that's just one show.There are many many more.

“In the early days of the western United States, a masked man and an Indian rode the plains, searching for truth and justice. Return with us now to those thrilling days of yesteryear, when from out of the past come the thundering hoofbeats of the great horse Silver! The Lone Ranger rides again!” Radio intro to The Lone Ranger.

Gunsmoke ran as a radio series for almost ten years and is regularly voted by radio enthusiasts as one of the best shows of its kind. It was, like the television series that it spawned, intended for adults and exploring far more complex themes than the more juvenile fare such as The Lone Ranger. The Six Shooter starring James Stewart only lasted for one season and 39 episodes but what good episodes they were. Frontier Gentleman was a western anthology series that ran for 42 episodes and is as enjoyable today as it ever was.

And this is just a small selection of the many old time radio westerns available to listen to online - just do a search on radio westerns and you'll be surprised at what you find.
Posted by Gary Dobbs/Jack Martin at 06:29