Radio Days - A little something for everyone

The first  play written specifically for British radio was called Danger and was set in a coal mine - listeners were encouraged to listen in the dark to aid with atmosphere. It was written by Richard Hughes in 1924 and broadcast that same year. Prior to this writers merely cobbled together stories without really understanding the new medium which led to Val Gielgud, then head of BBC Radio production to make the following statement when writing for listing magazine, RadioTimes back in the late Twenties. 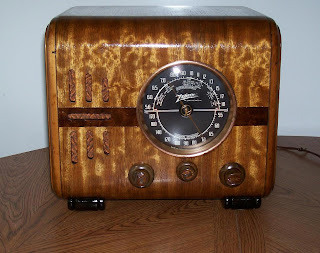 "The development of the radio play depends on three things - intelligent listening, informed criticism and good writing for the microphone. Too many authors fail to realize that a play written correctly for the microphone is so rare that its appearance makes us jump for joy"

In those days plays were often performed on a stage, with the actors dressed in costumes - this was all done to create the correct atmosphere behind the microphone.Things have certainly moved on since then - and the BBC are masters at producing audio plays in all genres. And nothing helps entertain during a long car journey as well as a well made radio play.

These days it's easy to find out about all the radio drama/comedy out there and below I have placed the links to several interesting websites on the subject.

BBC DRAMA REVIEW ONLINE -  This is a great resource with enthusiasts writing in detail about old classics as well as contemporary productions.

RADIOLOVERS,COM - A great place to listen to steamed old time radio for free.


CBS RADIO MYSTERY THEATER - A favourite site of mine which contains some great episodes from the CBS archive. You can listen to many for free or buy others on CD for reasonable prices

RADIOFOUREXTRA - the best radio station in the world and anyone who says otherwise is simply wrong.

THE INVISIBLE PLAY BY ALAN BECK - the famous history of the radio play is now available to read online
Posted by Gary Dobbs/Jack Martin at 05:11