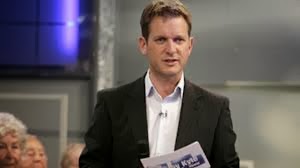 Granada Television have been left red faced after several guests from daytime TV's Jeremy Kyle show escaped and were rampaging through Manchester.

Police issued a statement that a security lapse at the show had indeed resulted in several members of the British lowlife making it to the streets. However a spokesman for Granada admitted that the flow of vermin was greater than official reports suggested and that there may be many more scumbags running around than the police are admitting.

'We are used to people storming off after hearing their DNA results,' Jeremy Kyle told the Archive. 'But they usually bolt to our hospitality room and hide amongst the rubber plants. We then coax them back onto set so that their shame can be played out to the baying audience.'

The latest news is that police have shot one of the scumbags but that several dangerous chavs, all said to be dressed in shell trackies, are still at large. Known to be among these is Kyle from Bradford, speciality taking it up the wrong un, and Justin from Penrhys who is known to have a string of children each with different mothers from the estate.

Police have warned the public to be vigilant and to ensure that any White Lightening Cider and Fags are hidden away for safety. 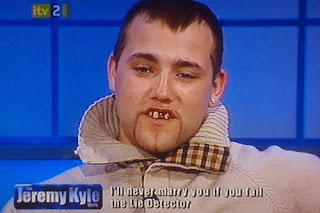 Posted by Gary Dobbs/Jack Martin at 04:48