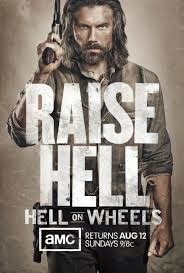 I'm enjoying AMC's western, Hell on Wheels and other than a few shakey episodes I'm of the opinion that the series has been pretty damn good, with many standout scenes - for instance last week's episode (series 4, episode 5) had an incredible set piece which surely rates as the most original escape from a hanging scene in all western history. The show has some great characters and with AMC's expertise with small screen production it certainly looks good in a gritty kind of way. And yet the series has largely failed to connect with the critics -


The Huffington Post called it "tedious," TV Guide "heavy-handed," USA Today "as subtle as a sledgehammer," The San Francisco Chronicle "cartoonish," The Philadelphia Daily News "meandering," and Variety "diluted and herky-jerky." Slate, The New York Times, and The Los Angeles Times said much the same. Two glowing reviews from The Washington Post and The Boston Globe notwithstanding, even the positive write-ups in Newsday, The Chicago Sun-Times, The New York Post, The Miami Herald, and The Wall Street Journal seemed to conclude that the show was solid if unspectacular, a significant come-down for a network accustomed to scooping up Emmys by the handful.

A lot of western fans read the Archive and chances are many watch the series so it would be interesting to know what Archive readers think of the show. Personally I enjoy the show and whilst I don't rate it as highly as that other relatively recent TV western, Deadwood I still rate it pretty highly. And of course westerns on the small screen are rare these days so it's a nice change amongst all the cop dramas and zombie-filled soap operas.


The show is set around the construction of the first transcontinental railroad across the USA, and the moveable towns called Hell on Wheels that exists alongside the railroad. AS soon as one stretch of rail is completed and the railroad moves on, the town goes with it. The current season (season 4) is set in 1867 and chances are given the reasonable ratings (it's the networks second most watches show just coming in behind The Walking Dead ) and AMC's track record is that the show will be renewed for a fifth series - I do hope so as I want to see the conclusion to this story.
Posted by Gary Dobbs/Jack Martin at 02:36

Email ThisBlogThis!Share to TwitterShare to FacebookShare to Pinterest
Labels: hell on wheels, westerns

I like the series a lot and it's a fine example of how TV has grown and matured. Not many western films dealing with the building of the railroads can match HELL ON WHEELS. The violence, language, and sex is well handled.

Look forward to every Saturday night to see the next episode of Hell on Wheels. I hate it when the season ends. Great Western.