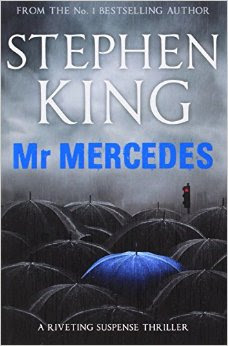 I first picked up this book in hardcover (as I do with most of Stephen King's books), but for some reason didn't get around to reading it until the eBook became available. I do love my Kindle and find it the only way to read fiction, but that's besides the point of this review. I still buy the physical books from author's I especially like and over recent years my shelves have become stocked with copies that will remain in mint condition as electronic ink becomes my medium of choice.

At just over 400 pages, it is a slim book by King's standards and all the better for it - the story is tighter, moves at a steady pace and held my attention for the few days it took me to read it. In fact I've not enjoyed a King novel so much as this one in a long, long time, and for once the ending (never King's strongest point) is absolutely rivetting. This then, the start of the Bill Hodges trilogy (the second, Finders Keepers has just come out in hardcover) is a  bloody good, no nonsense thriller that sees King at the top of his form.

Though King has always been a fucking fantastic writer, he has lost me a few times over the years (I could never dig the Dark Tower series for instance). He even on times bored me with the padding he tended to throw into each book. It got so bad that I morphed from one of his constant readers into an occassional reader,  but ever since 11,22, 63 (2011) he's been like an unstoppable rollercoaster delivering one great book after another, with the possible exception of that millionth  Dark Tower bookie, of course. One of the most accessible of his recent books, Joyland (2013) was almost a novella by King's standard and saw King swapping his crucifix for as snub nosed .38 as he crossed into the crime/thrlller genre. It's a genre he fits well and with  Mr Mercedes, King proves himself as much a master of it as he was with horror.

The plot - Bill Hodges is a retired cop. He spends his days slumped in from of daytime TV series, and contemplates ending it all by chewing on the end of his revolver. One of the old cases Bill was unable to solve during his time on the job involved a maniac driving a mercedes into a crowd of job seekers outside a job fair. Hodges is unsettled into the mindless boredom of retirement when he gets a taunting letter from the maniac who turned the luxury car into a deadly weapon. It seems the object behind the letter is to push Hodges along the road to chewing on his gun but ironically the letter gives the retired cop a reason to go on.

Under the Blue Umbrella, is a social network where Hodges gets to chat with the maniac and slowly events turn, and before the reader know it they are fully invested in this excellent story. Of course King's grasp of character is awe aspiring and the reader really becomes involved in the characters that populate the book, the characters become so real that we almost feel as if we've know them our entire lives -  Holly for instance is a wonderful creation, as is Jerome, and I must own up to shedding a tear when a major character is snuffed out around the half way point - there's not many writers who can turn a cynical forty something old school male into a snivelling girl but King is one such writer.

King doesn't go down the mystery thriller road and we, the readers, are introduced to the maniac, Mr Mercedes, or Brady very early in the story, and we spend much of the book walking around his inner life. And boy is his madness built up in a realitic and chilling way, nuerosis is piled on top of nuerosis as we begin to, if not emphasise then at least understand what could turn Brady into such a total bastard. Yep, this world we live in is a fucked up place.


An excellent crime thriller which Stephen King calls his first hard-boiled detective story, but I don't think it's especially hard-boiled since I usually associate the phrase hard-boiled with the paired back style of Chandler and authors of that ilk. King is much too verbose to be truly hard-boiled  but all the same the story is lean by King's usual standards.