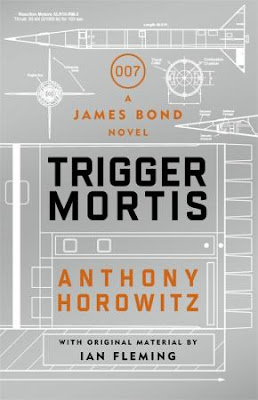 As far as James Bond continuation novels go this is one of the most faithful in both characterisation of Bond and that flow which Kingsley Amis termed, The Fleming Sweep - Author Anthony Horowitz was aided in his task of bringing James Bond back by Ian Fleming himself - Horowitz explains in his afterword that prior to writing the novel he was given access to many of Ian Fleming's papers. Amongst these papers were several outlines, written by Fleming, for episodes of a proposed 007 TV series. One of these outlines saw Bond placed in the extremely dangerous world of Grand Prix.

'I was quite surprised that although Bond had memorably played bridge in Moonraker, golf in Goldfinger and baccarat in Casino Royale, he had never, in any of the novels, taken part in the much more lethal world of Grand Prix. Better still - and this was really exciting for me - Fleming's outline contained a scene with Bond meeting Bill Tanner and M at the Secret Service HQ.' Anthony Horowitz

Horowitz was able to use parts of the scene in the second chapter of his novel, which means of course that a small part of this new Bond was written by Fleming himself. Horowitz of course has already taken on iconic characters such as Sherlock Holmes and Moriarty to great success, and now he tackles James Bond. Of course it could be argued that his Alex Ryder series is basically teenage James Bond but that's an argument for another time.

In Trigger Mortis (dreadful title, that) we find Bond still shacked up with Pussy Galore following the events told in Fleming's Goldfinger. Indeed this new novel is set just two weeks after  Goldinger's 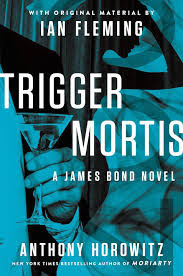 plans to rob Fort Knox fell apart thanks to the intervention of Bond and the delightful, Miss Galore.

She waited until Bond had finished his egg, the lit two cigarettes - not the Morlands brand which were specially made for him and which he preferred, but one of her own Chesterfields. She passed it across and Bond inhaled deeply, reflecting that the first cigarette of the day definitely tasted better when it came from the lips of a beautiful woman.

The Bond of this latest book is classic Bond - chauvinistic, heavy smoking, hard drinking. Horowitz certainly has a good grip on the character and the book carefully follows the blueprint set out over several Bond novels by Fleming himself- we even get the classic style, though ridiculous , scene where the bad guy, this time a Korean named Sin Jai-Seong but known by his Americanised name of Jason Sin tells Bond what he intends to do, the full details of his diabolical plan are laid out to a seemingly doomed 007. Big mistake there Mr Megalomaniac because we know that Bond is going to somehow escape from this latest brush with almost certain death and be able to thwart your dastardly schemes.

'I wonder? Am I acting out of vanity. Am I, perhaps a little too pleased with myself? I do not know - but I suppose I must be as there can be no other reason to explain everything to you. Even so I must be brief.'

Pussy Galore though only plays a small part in this book and the main Bond girl is an American secret service agent with the wonderfully Flemingish name of Jeopardy Lane. But Pussy Galore does have a satisfying arc - in Goldfinger she was a lesbian who was turned by Bond, (never having met a real man, you see) but in this book she finds that her attachment to Bond is only fleeting and she soon leaves him, going off with another woman.

An excellent Bond novel then that feels a lot like Fleming. In fact the only thing I didn't like is the title, Trigger Mortis (which refers to the fail safe device on a USA Vanguard rocket). It's just my opinion but I think Mr Sin would have been a far more Bondian title. I asked Anthony Horowitz about this and he did  consider titling the book, Mr Sin, but in the end he went with the actual title. He didn't say why - perhaps Mr Sin would sound too similar to Colonel Sun.

It matters not...this Bond novel is quite excellent.
Posted by Gary Dobbs/Jack Martin at 14:40