Tonyrefail's Workman's Club: A shoddy way to treat the dead 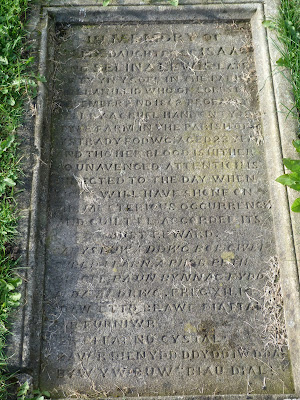 Working on Dark Valleys, my forthcoming book, I was led to the remains of an old graveyard next to the Workman's Club in Tonyrefail. Next door to the club stood the Ainon Welsh Baptist Chapel and it was here that 22 year old Jane Lewis who was murdered back in 1862 was buried...in fact Jane was the first person to be buried in the chapel which at that time had just been built.

Jane's story, which will be fully covered in Dark Valleys, is a sad and mysterious one - indeed to this day the identity of her killer remains a mystery. And it was her gravestone that brought me to the car park of the Workman's Club - back in 1995 the club purchased the old chapel and graveyard and proceeded to demolish the old building in order to construct a car park for the patrons of the club. Several of the stones were retained from the graveyard and these were placed behind a children's play area next to the car park - Jane's stone remains there set into the ground.

However many of the other stones that remained behind have been vandalised and the entire area is awash  with litter and dog mess. These stones are very old, but nevertheless this seemed to me to be a very shoddy way of treating the dead. It shows a total lack of respect, even recognition, for people who have lived and gone before us. 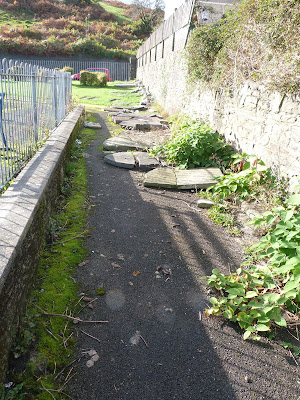 Thinking this was clearly not right, and not knowing what happened to the remains of the people buried here when the chapel was demolished, I went into the Workman's Club where I was told the council were responsible for the ground next to the car park, which included the children's play area as well as the old graves.

A call to the council found the council disputing ownership and I was given a land registry number for the plot of ground - CYM474273. I then contacted The Welsh Baptist Union and spoke to a lady, Bonnie Davies who tracked down the original sale for me. Yes, she informed me:  'The Ainon Chapel had belonged to the Welsh Baptist Union but on the 20th January 1995 it was sold to the Workman's Club, Tonyrefail. The sale specified the chapel and graveyard, which made the club responsible for the remains buried therein.'

I again visited the club but could not find anyone to speak to that had anything to say, I failed to speak to anyone on the committee of the club. Being a club, the Workman is owned by its members and each night in order to visit the pub these members walk past these shattered and discarded gravestones. I hope they don't get too much dog shit on their shoes. 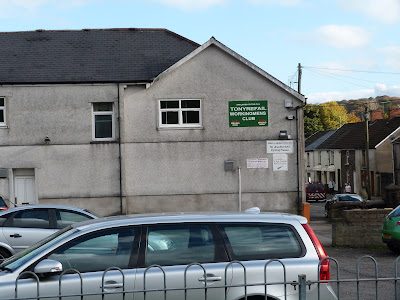 Thinking that the local newspaper should cover the disgraceful way these old gravestones are being treated, I went to the local press. But as I banged on about the old graves I could sense the reporter on the other end of the line, gazing vacantly at the ceiling. The reporter was no doubt thinking, 'Old graves! Haven't you got anything about living people.Or funny shaped potatoes. Funny shaped potatoes always sell papers. Why we had one that looked like  a cock.''

The reporter said he'd  get back to me and I went for a shit, taking a copy of their newspaper with me. And so as I stood there, stained pages of the newspaper swirling into the abyss of the flushing system, I decided to publish this to the internet, in the hope that something is done. For these gravestones may be old, the people they commemorated stricken from memory, but this is a disgrace. It is a disgrace that should be felt by:

Rhondda Cynon Taff Council - for not policing this situation, there is a children's play area next to the car park with only broken gravestones and mounds of dog shit separating one from the other. 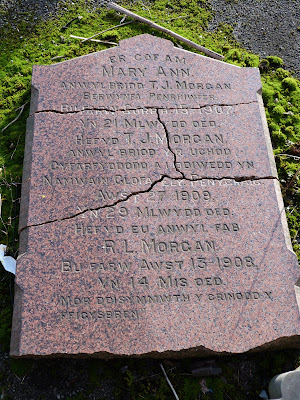 The Workman's Club - who may have ultimate responsibility.

The Welsh Baptist Union - for allowing the sale of such a building and graveyard in the first place. People once prayed here, got married here and buried their loved ones here.


The people buried here were promised everlasting remembrance....well, they got it until there was money to be made by the construction of a car park. Then they became a part of the land to be developed.

I'd like to know what happened to the remains buried here when the car park was built? Where were they reburied? Where they exhumed with respect? Or where they simply bulldozed into tiny bone fragments and then used as landfill?


Something needs to be done...this is a stain on Tonyrefail itself.

POSTSCRIPT: Since the posting of this article I have been informed that the human remains from the chapel have been buried in a communal grave in Trane cemetary, Tonyrefail. Whatever the feelings about one large plot for all are, then surely the stones should have been removed to the new cemetary and a memorial erected. The Welsh Baptists Union told me, 'this wouldn't happen today but sadly in the 1990's it did.'

Posted by Gary Dobbs/Jack Martin at 05:28

You want to see how R,C,T treat you when your alive


cllr hanagan said that she and cllr roberts have had a meeting with the clubs committee and they did what they did as they had recieved a complaint that one of the stones was loose and could have fallen on a child. quite how it is or rather was loose i cant image when they where all set in substantial concrete footings. she also said that she has contacted the community council to see if the remains of the stones can be put in trane with some sort of rememberence garden there. but wasnt sure as to who would foot the bill

I have heard Tesco's were interested in the land for an Extra store but after the fury over the smashed stones they pulled out. What needs to be done is to look at the planning the council granted the club for the use of the land to get to the bottom of things. I don't think anyone will forget - one of the stones has historical importance and whoever it was who decided to smash the stone is a complete idiot. I will be writing a follow up article soon and I hope to discover who smashed the stones and who told them to do so.