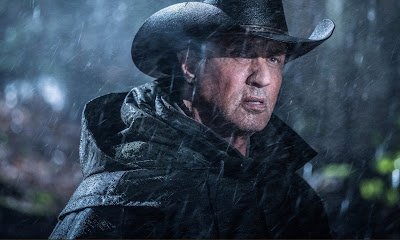 Author David Morrell, creator of Rambo, has come out  against the latest movie in the franchise, Rambo Last Blood.


'I felt degraded and dehumanized after I left the theater. In 2016 Sly and I had numerous lengthy telephone conversations about creating what he described as a “soulful” Rambo. Then he stopped communicating with me. One element of our conversations is in the new film (the search for the missing child as an example of the family he never had), but instead of being soulful, this new movie lacks one. I felt I was less a human being for having seen it, and today that’s an unfortunate message.'  Morrell wrote on his Facebook page

The film, the fifth in the franchise, sees Sylvester Stallone's John Rambo in a quest to rescue a girl held captive by a criminal gang in Mexico. And it has left critics perplexed over its depiction of Mexico as a criminal wasteland, however in fairness the Rambo movies have never been meant to be taken seriously and best work if the viewer accepts the gung ho nonsense for what it is.

'The film is a mess, resembling a 1976 James Mitchum (Robert Mitchum’s son) film called TRACKDOWN, which has almost the same plot, in which a Montana rancher gets even with sex traffickers (in this case in Los Angeles), who have kidnapped a young female relative. That film is typical of ultra-violent 1970s exploitation “grindhouse” films, the technique of which RAMBO: LAST BLOOD resembles. The sets here look cheap. The direction is awkward. The script is filled with explanatory dialogue (“she was like the family I never had” or words to that effect—we get it—explanation not required, and this from an actor/writer who prides himself on communicating visually rather than through unnecessary words). The music has that droning synthetic sound that TV dramas use to support needless, tedious dialogue. The characters are post-it-note caricatures. Rambo could be called John Smith, and the film wouldn’t change. It assumes the audience is familiar with Rambo’s background whereas anyone under 40 will wonder what on earth is going on with those tunnels. From multiple perspective, this film fails miserably. The best I can say is that the first two minutes were promising.' Morrell from his Facebook post.

The critics have been no kinder and have called the direction, lethargic and the acting and writing, risible. Empire Magazine claimed that fans should put their headbands to half mast and remember better days, because this new Rambo is a damp squib, while The Observer dismissed the film, claimit it was  nothing but cheap and nasty carnage.

The press have made much out of the original author's dislike for the film with the New York Times claiming that Morrell is ashamed to be associated with Stallone's take on the character, though in truth the author actually said that he was embarrassed to have his name associated with the movie rather than Stallone himself.
Posted by Gary Dobbs/Jack Martin at 04:17