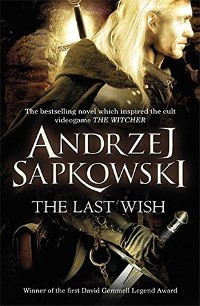 Until now I was only vaguely aware of the bestselling Witcher series - I'd heard of the hugely successful video games based on the books, but then I'm hardly what you'd call a gamer (even if I did become hooked on Red Dead Redemption II last year). I was also aware that the author outsells the likes of Stephen King in his native Poland but until now the books had escaped me.

I do read in the fantasy genre from time to time, but these excursions into the genre are few and far between. In fact, it was  the excellent Netflix series (watching all eight episodes of the first season over two days) that provoked me to explore the series that started the whole thing. It seems I am not alone in jumping from the TV series to the books - a recent news report (HERE) revealed that the Last Wish has this week made the New York Times bestseller list 27 years after it was first published.

The Last Wish is not the first Witcher book (that honour goes to 1994's, Blood of the Elves) but in chronological terms the six stories collected here  are in fact the first in the series. And so, armed with some knowledge of the character, I started to turn the virtual pages. Geralt is a Witcher, a mutated human being with enhanced eyesight, healing powers and limited magical abilities. He supposedly is also immune from human emotions, though many of his interactions in these stories belie that fact and the character comes across with a very real belief system of what is right and wrong. It seems that Witchers roam the country taking payment for destroying monsters that are terrorising the towns and villages. And whilst this may seem like the standard D&D fantasy type stuff it is a lot more than that, and the author subverts and twists traditional folk lore and fairy tales for his own needs. There's also a lot of dark humour in the stories, which greatly enhanced my enjoyment of the tales.

What is impressive from a technical standpoint is the clever way that the author has uses a device to connect these stories together rather than simply dump them together between the covers. This works as a novel engine, driving the narrative forward and none of the stories seem disjointed from the other - the reader is left with the feeling that they are reading an episodic novel, one complete story rather than an anthology of tales. This was done really well.  Basically the stories here are a mixture of twists, perversions even on traditional fairy tales as well as some European folklore that I wasn't so familiar wit. Though the Grimm brothers and  Hans Christian Anderson were never as dark, nor in fact as uproariously funny.

I very much enjoyed this book and coming off my viewing of the Netflix series, it gave me more understanding of the characters and worlds that Andrzej Sapkowski has created. I'll certainly be checking out more while we wait for the next series to drop on Netflix.

Posted by Gary Dobbs/Jack Martin at 06:06

Email ThisBlogThis!Share to TwitterShare to FacebookShare to Pinterest
Labels: Andrzej Sapkowski, the last wish, The witcher